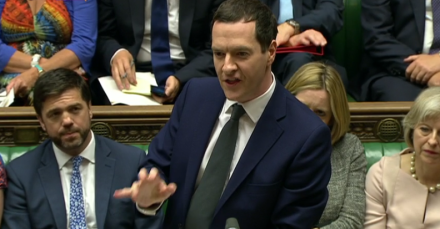 Don’t be fooled. While the abandonment of Tax Credits cuts is to be welcomed – and should be rightly lauded as a genuine victory for Labour’s leadership – it is not enough. And if the Godot-like Universal Credit is ever rolled out, proposed cuts to that mean this is a delaying of pain, not a end to the problem.

Now it may be that the widely panned, unutterably complicated, deeply problematic and monumentally delayed Universal Credit wheeze may never come to fruition. And if so Osborne will have to decide where the pain will come if he wants – as he currently does – to still make these savings from somewhere. He’s unlikely to put himself through quite this level of political agony again, but make no mistake – this is a reprieve not an end.

He also attempted some sleight of hand when it came to the funding of social care. Announcing a ability for councils to raise Council Tax by up to a further 2% is – at best – wholly disingenuous. Firstly, it confers all the political risk to hard-pressed councils. Those whose grant he just cut by 56%. Then there is the fact that high property values (i.e. areas where you could raise a substantial amount through a Council Tax raise) do not map well onto areas with high demand in social care. So the councils with the most need have the least ability to raise money.

His approach to health had so much smoke (and and mirrors) it should have come with a virulent health warning. Bringing already promised money forward is not the same thing as offering new money. Nor is it anything like enough to plug the funding gap the immediate crisis presents.

In the meantime changing the funding for people to train as nurses from grants to loans will stymie an already struggling profession. Public Health – an area focused on keeping people healthier for longer, thus preventing them from needing more expensive, acute services later on – has been cut once again. And the ongoing crisis in social care exacerbated by the local government cuts will continue to have a devastating impact on the NHS.

Labour’s job here is clear. We have to expose that George Osborne’s long term plan is a myth. It’s long term pain for short term political gain. For him and for no one else.

We may well be divided on international issues (and it would be Pollyannaish to say that we are not) but we have largely come to an agreement on an anti-austerity economic platform. Osborne’s leadership on the economy is faltering. Despite the pain he is inflicting on the country, the Deficit is not reducing at anything like the rate he promised. In fact, we’re going backwards.  He is failing on his own terms and on ours.

That has to be the laser like focus of both Jeremy Corbyn and John McDonnell. Drop the silly gimmicks that detract from that message. The message is too important to fail. We can’t allow Osborne to get away with treating the country and our people this shabbily. We have to present a cogent and coherent alternative that we can sell to the country while never letting an opportunity to expose just how much Osborne and the Tories are failing pass us by.

Opposition is the toughest job in the world. We don’t want to be an opposition any longer than we have to. To do so leaves these Thatcherites driving our economy off a cliff. It is our job, every hour, every day, every week month and year to stop them.

Osborne’s Spending Review will almost certainly unravel over the next few days. If past form is anything to go by, the glaringly obvious errors I’ve highlighted above won’t be the only mistakes made as the press shift from the presentation to the detail. This is an ongoing opportunity. Let’s grasp it.