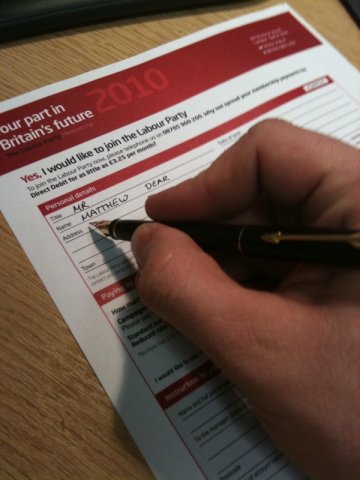 ‘Democracy’ in Labour Party terms is difficult to argue with as a word. It’s our party, and we should return it from being a Cadre Party to the mass party it once was.

Except this is, now at least, a farce. The idea that Labour is a ‘mass’ party is disingenuous. Labour’s membership in the post-war years reached a height of over one million (which pales in comparison to the Conservative’s two million, mind), but even this is merely under 4% of that era’s population. Now, Labour’s membership is less than 0.5% of the UK population.

But even that doesn’t really cover it. Because unlike, say, a poll’s sample, which is weighted to be representative of the nation, the membership does no such thing. By God, this is a middle class party. The recent intake has been, according to Tim Bale’s recent research, “younger, more educated urbanites… who used to vote Green”. They come disproportionately from affluent constituencies, and even in poor constituencies, they tend to be recruitments from university campuses, the hotbeds of middle-class liberal intellectualism. We’re talking the ‘liberal elite’, we are fulfilling the stereotypes of Nigel Farage.

So when we talk about ‘democracy’, what we really mean is a very small, middle class selectorate, or a very large suburb.

And there’s a problem with handing over policy-making and advising of what should be a mass party representing workers to a middle-class selectorate, so far removed -both ideologically and geographically- from Labour’s core vote and poorer voters; it won’t represent the masses at all, least of all our voter base. A party restricted to Urbanites is far from the mass party it proclaims to be. And if the voting mechanisms for policy-making are restricted to delegations to Conference which is way out of the budgets of a lot of working class voters, then the problem will only be exacerbated further. Simply put, the outcome will be policies that are more Green than red. And that means telling working class voters what is best for them rather than asking at all. With the result that the Greens got at the election: the votes of students and affluent dwellers of the well-to-do wards of Brighton, and little else.

Attlee, Wilson, they rode a tide of valence issues with the consent of the working class (such as the Beveridge Report) and made their own (like the NHS). We won’t get to do that if the membership refuses to believe today’s valence issues exist, refuse to acknowledge that working class people might believe what is best for them is different to what our party thinks is best for them. If we choose to lecture instead of listen.

So what can we do to make party democracy truly representative and consultative for who we work for? For those of us that need a Labour government?

We bring in Labour voters to our democracy, we ask them what matters. A consultation like 1987’s Labour Listens. Bring in cheaper prices for Conference and for membership. Reserve places on the NEC for disadvantaged members. Increase our presence in working class communities. Conduct door-to-door membership drives in the poorest constituencies and wards. Outside London. In places that may very well have, as Cruddas has noted, ‘settler’ working class populations.

But at the end of the day, if we appear an elitist party with an elite membership creating elitist policy, working class people won’t want to get involved, and we’ll become ever more an echo-chamber, repeating a cycle that will end, inevitably, in Tory hegemony and a betrayal of our voters. It’s time for diversification of, if not our membership, then our consultative processes. It’s time to listen.