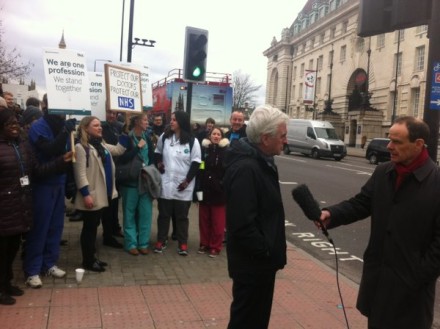 Yesterday junior doctors went on strike for the first time in four decades, and the Labour Party came out in official support of industrial action for what some contend is the first time ever. Despite calls to the contrary, in its one hundred and fifteen years the official party line has rarely been one that declares solidarity with people on strike (some digging shows that the 1972 miners’ strike may be one such exception).

Shadow Chancellor, John McDonnell, announced a change to this long-held stance shortly after he first stepped into the shadow cabinet: Labour will “automatically” support all strikes taken by the trade union movement. And so, while junior doctors stood up to protest against the Government’s vindictive attack on the NHS, the Labour Party officially stood with them.

This is one seemingly small change that has taken place within the Labour party since Jeremy Corbyn was elected leader in a landslide victory last September. It’s unlikely that we would have witnessed this move had another leadership candidate been at the party’s helm. This might seem like an unbelievable fact, but when you are used to a way of thinking, you don’t realise how nonsensical it has come to be. This change sends an important message that the Labour party is one unafraid to make its alliances – with people of all kinds of professions, and none, who have often have no other option but to strike – known.

When trade union bashing is easy to come by, the only way you get to this point is by proposing another way of doing politics. Debate won’t result in policies, stances and ideas on which everyone in the party can agree. There are certain schisms, evidently on Trident and certain aspects of British foreign policy, on which it’s unlikely some MPs will agree with Corbyn. But that’s no excuse for the response we’ve seen of late; MPs plugging their fingers in their ears and dismissing any challenges to their viewpoint. In this version of reality, nuance is reduced to a binary choice and the other side is always offensively wrong.

But the hard-headedness we’ve seen of late is not the cornerstone of a thriving democracy. Proper discussion (different to the invidious infighting that’s been on show since Corbyn’s victory) should be the lifeblood of a healthy Parliament. Screaming down the opposition – especially if they are in your own party – doesn’t lead to an open or positive politics.

Not all shifts in the Labour Party should breed the contention that certain pressure points spew forth. Take the economy. The Labour leadership have taken a clear economic stance – anti-austerity is now the name of the game. Although this needs fleshing out in policy terms, an offer for low- and middle-income people, which Corbyn wrote about over the weekend, is one I imagine most Labour people could get on board with.

However, Labour is spending far too much time bogged down in areas of disagreement – at times orchestrated or exacerbated by MPs disgruntled with the change in leadership.  Particularly now that debate has moved back to Trident so soon after the Syria vote. On the issue of nuclear weapons tempers flare, understandably – as an opponent of Trident I recognise the importance of this debate. But after a number of months already dominated by infighting there are other, increasingly pressing issues on which the Labour Party could focus for the time being.

We need this from Labour, as the Tories are riding roughshod over democracy, the welfare state and the NHS – to name but a few of their victims.

The Labour Party is figuring out how to work together when rifts are breaking out, or being cooked up, on a regular basis. For MPs and members it’s worth remembering that we are all part of the same party and Jeremy Corbyn is not the enemy: he has ideas worth listening to. So it’s time to find issues to which we can provide a positive alternative – and unite around them.