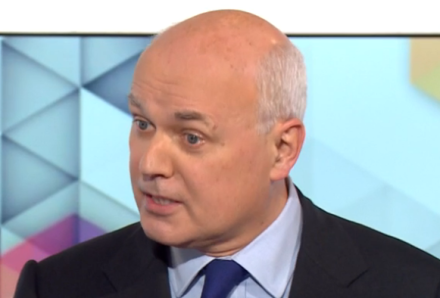 The Government’s cuts are dividing society because, in Iain Duncan Smith’s words, they’re “narrowly focused on getting the deficit down”. We are not “all in this together”. The cracks Duncan Smith has created in his own party through resigning prove Labour can take an anti-cuts stance. But that doesn’t just mean attacking their opponents or relying on moral arguments: they need an economic story of their own.

Right now, the power is with Labour. The Conservatives, wedded to welfare cuts, are incompetent – there’s plenty of evidence for this. By his own standards, Osborne has been an abject failure: he didn’t come anywhere near to clearing the debt in the last parliament, like he said he would; the Conservative government is borrowing even more than the Labour government before it, the same Labour government they said spent too much after backing their plans pound for pound; wage growth is weak; insecure work is on the rise; industrial production is shrinking; and the northern powerhouse is nonexistent as spending isn’t fairly distributed between the north and south (48.6% of spending on current infrastructure work goes to London, 0.8% to the north east.)

Osborne’s fondness for slash and burn economics is rapidly losing credence. From Mariana Mazzucato to Paul Krugman economists are roundly dismissing austerity economics as a mistake. Then there’s Duncan Smith, despite his 6-year stint in the DWP, he’s questioning the driving force behind the government’s welfare plan. But, the funfair of his resignation won’t automatically result in a sea change in public opinion. The mood might be shifting somewhat but as recently as July last year, polls still suggested the public were in favour of cutting public spending to deal with the country’s public finances. It seemed to these people that cuts were the best way to repair the country.

So what should Labour do? They need to put in the groundwork to shift opinion, to boldly show: welfare cuts don’t work. Politics isn’t simply about making concessions or thinking that public opinion is static. It’s a politician’s job to convince the public of their message. IDS’s candid attack on his own party is good ammunition but Labour can’t just adopt a moralistic tone where the Tories are “bad” and Labour are “good”. There’s a pre-existing idea that the left occupy a self-righteous moral ground, reinforcing this alone won’t necessarily pick up support.

Now is the time for narrative. When the 2008 financial crash hit, British right wing parties had a clear message fuelled by fear (the Conservatives: “Labour spent too much, we’ll cut it”) and xenophobia (Ukip: “immigrants are our problem, let’s close our borders”). Meanwhile, the status quo was shook to its very core whilst the left, unprepared, were forced to sit back and watch. There was no strong, understandable alternative to austerity. Labour must learn from this and create a message of optimism.

John McDonnell’s fiscal credibility rule is the start of an attempt to claw back credibility on the economy. The best way to do this is by making anti-austerity a real, relatable idea. They should use stories to show that welfare cuts don’t work, while making an offer for the working classes and the middle classes; the people who are struggling to make ends meat and the people who are doing ok.

Underneath the narrative, there will of course be complexity: Labour will have substantial policies for the self-employed and small businesses, they’ll be the party of home ownership for the millions struggling to get on the housing ladder, champion gender and race equality and have a proper investment policy for infrastructure and green industry. That way Labour can counter the short-termism of Tory economics, which is riding roughshod over the British people and the environment.

Creating this message is understandably tough, particularly at a time when Labour infighting and vacuous leadership plots are in no short supply. Yet Corbyn and his cabinet must look beyond this pettiness, to the political ground beyond Westminster that is theirs to claim.

Britain is the fifth richest country in the world, but it’s one of the most unequal countries in the EU. Society is going backwards to the inequality levels we saw in Victorian society. It was this environment that led to the rise of the Labour Party; as the Tories tear themselves apart, it is only right now that Labour steps up to the plate with a narrative of their own.