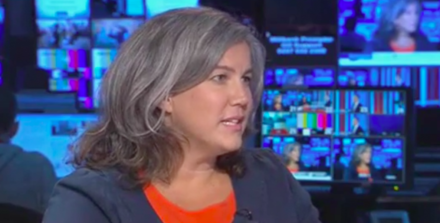 Jeremy Hunt now appears to be the only person standing in the way of this week’s huge junior doctors’ strike being called off. Shadow Health Secretary Heidi Alexander has drawn up a plan with backing from the British Medical Association (BMA) and the Royal College of Surgeons, as well as cross-party support, that would see Tuesday and Wednedsay’s industrial action halted.

Alexander lays out details of the deal to Hunt in an open letter that is also signed by former health ministers, Conservative Dan Poulter and Lib Dem Norman Lamb, as well as the SNP’s Westminster health spokesperson Philippa Whitford. You can read the full letter to the Health Secretary below.

The plan would see new junior doctor contracts, which Hunt wants to impose nationwide, limited to trial runs at small number of trusts in order to assess what the impact would be on weekend care.

Aleexander today stressed that finding a way to settle the dispute and deliver care for patients was more important than party politics, and urged Hunt to sign up to the deal.

“This dispute has gone on for far too long and has caused distress for patients, doctors and everyone who cares about the NHS,” she said.

“Resolving this deadlock is now way beyond party politics, it is about finding a way to deliver safe care for patients in the weeks, months and years ahead.

“Jeremy Hunt now has a clear choice. He needs to do the right thing for patients and accept this cross-party proposal.”

The letter, signed by Alexander, Lamb, Poulter and Whitford, says that rolling out trial runs of the contract would clear up the “misunderstandings” Hunt claims exist about the proposals:

The letter says: “We are aware that you have expressed the view that some misunderstandings have developed about the new contract and a pilot would provide an opportunity for a clearer appreciation of what the new contract does and doesn’t do in particular areas. It would also allow genuine progress towards your manifesto commitment of high-quality emergency care across seven days of the week.”

However, the MPs also raised concerns about the Health Secretary’s assertion that current contract arrangements are the cause of weekend deaths: “The lack of any robust research proving a causal link between junior doctor staffing arrangements and the number of patients who die within 30 days of a weekend admission needs to be addressed.

“As part of the independent evaluation, we would suggest an audit of mortality cases to identify the cause of death and whether it could have been avoided. This work could assess the impact of nursing ratios, access to diagnostic imaging and consultant cover as well as the contribution of junior doctor cover.”

Clare Marx, president of the Royal College of Surgeons, added her strong backing to the proposals as a way of finally finding an end to the dispute after months of negotiations with little success.

She said: “We strongly back this cross-party proposal for piloting the contract. It charts a possible way out of the current impasse and provides an opportunity to evaluate the impact of the new contract. Patients must come first. The dispute must come to an end.

“The current contract dispute is a lose-lose situation for all parties, especially patients. If the government proceeds with imposition in its current form it will inflict further damage on workforce morale and ultimately patient care. The planned industrial action is in the interests of neither the public nor doctors.”

You can read the letter in full here (click to enlarge): 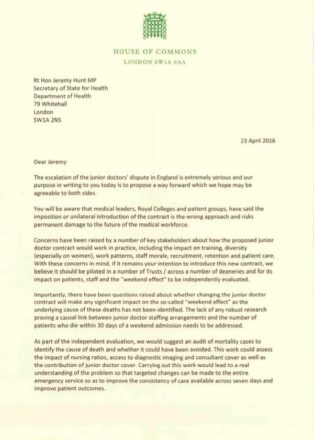 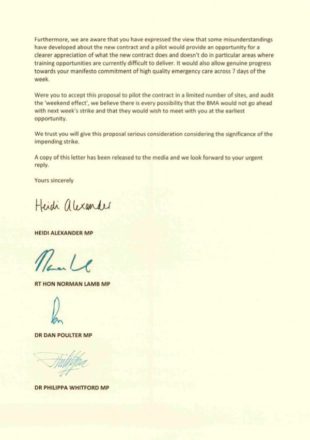