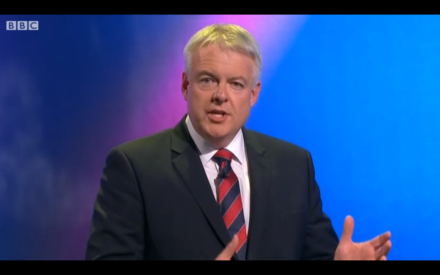 Carwyn Jones has vowed to stand again for the role of First Minister after an Assembly vote for the nomination ended in deadlock today.

Jones, the Welsh Labour leader, said his party has a “clear mandate” to form a Government after they were last week returned as the largest party – but just short of a majority in the 60-seat Assembly.

The leader of Welsh Labour today failed to secure a majority of votes in the Senedd for the position after tieing with Leanne Wood, the Plaid Cymru leader.

Plaid Cymru, the Welsh Conservatives and UKIP joined a block vote for Wood, giving both her and Jones 29 votes. Jones won the support of the Labour assembly members and Liberal Democrat Kirsty Williams.

Last week’s elections ended with Labour on 29 seats; Plaid Cymru 12; the Tories 11; UKIP seven and the Lib Dems one. Jones, who had initially expected to be able to form a minority government, remains as First Minister until he is re-appointed or replaced. It is now likely there will be another vote for the position next week. If assembly members cannot choose a First Minister within 28 days of polling day then there may be another Welsh election.

Welsh Labour AM Alun Davies has accused Plaid Cymru of doing and “unseemly deal” and said the Welsh people wanted a Government quickly.

“Plaid Cymru have just fought an election campaign spending eight weeks saying they’d never do a deal with UKIP, or the Tories. They referred to UKIP as the ‘far right’. And yet today we’ve seen them stitching up a deal to try and form a government…

“Welsh Labour won a clear mandate in the election last week. 29 seats is a clear lead over Plaid Cymru’s 12 seats, actually a bigger lead than Labour had over the Tories in 2011. People expected us to be given the right to form a Government, and for the other parties to hold us to account on the way we perform in office.

“What we’ve seen today in an unseemly deal between two parties hurting from election defeat, and UKIP going along for the ride.

“I can only imagine what the people in our steel communities are thinking today – they want answers and they want to see us working together to save their jobs. What they’ve got is an unseemly spectacle and delay on the formation of a Government which would put all its energy in finding a sustainable future for the industry.

“We’ve also a European referendum just 6 weeks away. Carwyn had asked all progressive parties to join together in fighting to remain in the EU. Instead of that, Plaid have handed UKIP another day in the sun.”

In 2007 Labour ran a minority Government after winning 26 seats.