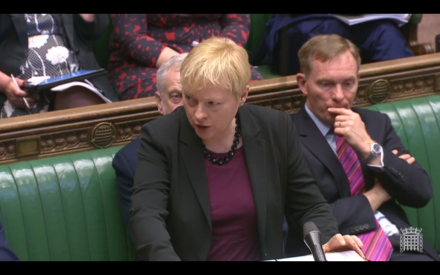 Eagle, who previously finished first in October, won with a score of 3.69 on our 1 to 5 scale. This is the second highest winning score recently. McDonnell won with 3.85 in last month’s rankings but this was an unusually high result.

Eagle, the shadow Business Secretary, has attracted praise for a calm performance at PMQs at the end of last month, looking like a stateswoman and landing blows on the Conservatives. She is the only woman in the top five-rated politicians.

Core shadow Cabinet supporters of Jeremy Corbyn tend to attract the largest amount of 1/5 scores, even if their overall score is more balance. Emily Thornberry and Diane Abbott were awarded the lowest mark by 21 per cent and 35 per cent of readers respectively.

Abbott, the shadow International Development Secretary, finished 25th in the ranking, which is notable for being five places behind colleague Jon Trickett. Over the past month the pair have been in comparable positions responding in the media to local election results and both are close allies of Corbyn. The gap between the two implies other criteria are more important for final scores – for example the portfolio they hold or people’s judgements of their characters.

This biggest change since last month comes from Andy Burnham, who has jumped eight places in the rankings. His score this month is 3.18, up from 2.92. The shadow Home Secretary has recently attracted attention for announcing his intention to become Labour’s candidate for Manchester Mayor.

You can see the full results here: