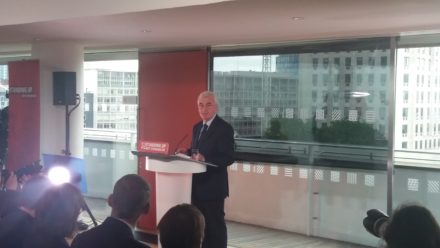 John McDonnell today confirmed expectations that Jeremy Corbyn would face a leadership election in the “next few days” as he used a Brexit speech to highlight the imminent “end” of freedom of movement.

The shadow Chancellor repeated his vow never to stand as Labour leader and struck a relaxed tone, after a week of turmoil, as he told backbench MPs to “calm down”.

McDonnell, a longstanding ally of Corbyn, confirmed he would chair his friend’s campaign once again as expectations mounted that Angela Eagle would launch a challenge on Monday.

“If there is to be a challenge that will emerge over the next few days. My message to Labour MPs is ‘calm down’ and let’s do our job.

“We call each other ‘comrade’ because we want to work together in a spirit of solidarity to transform society.”

He also lampooned the contradictions in the recent media coverage of the Labour leadership, saying: “The story was that I was forcing him out in a plot. The story this week is that I am forcing him to stay on.”

McDonnell was speaking at the Royal Festival Hall, in London, as responded to questions about Corbyn, who lost a confidence motion among MPs this week, and laid out Labour’s stance on the shock result of the EU referendum.

“When Britain leaves the EU free movement of people and labour would come to an end.

“We need now to consult with the British people. The problem with the referendum is it is a binary choice. We have a responsibility to allow the people in this country to participate in the debate [about Britain’s relationship with Europe].

“Those communities that felt left behind blamed immigration and the EU.”

He was describing the “formal reality as it stands”, rather than setting out Labour’s position on free movement, he later wrote on Twitter.