The vote to leave the European Union was a stark reminder that Labour’s political elites are losing touch with the working class communities the party was founded to represent.

Despite the party urging otherwise, the majority of Labour’s heartlands – Britain’s neglected former industrial towns – voted to leave the EU. In many of those places, Labour’s support base has been in decline for some time.

There are many explanations for this existential threat to the Labour party. Labour’s inability to address concerns on migration. The impact of the changing economy. The widening chasm in opportunity between towns and cities. But the reason we talk about least is perhaps the most important: our voters aren’t just giving up on us, they are giving up on politics altogether.

As part of the Fabian Society’s project on democratic reform, I’ve spent some time conducting focus groups with Labour voters and Labour “considerers” in seats that Labour must either hold or win if it is to ever form a government. At the start of each group, I asked participants to draw the first thing that came in to their mind when thinking about politics and politicians. The resulting images should be of serious concern. 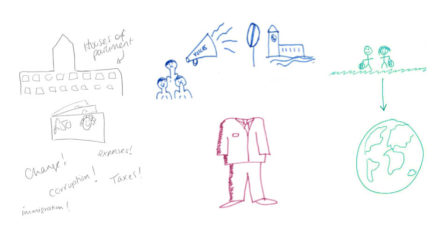 The Labour voters in the focus groups were perhaps the most scathing. Politics is “men in suits arguing and snoozing”, and all about “backhanders”. Politicians “don’t know what goes on in the real world”, and “you only see them when you are ready to vote”. Labour considerers reinforced this sense of disconnection, arguing politicians “are above everyone else” or “not like us”.

These conversations bring to life wider trends in UK politics. Both voter turnout and trust in politics and government have been declining for more than 50 years. And, the recent Hansard Society audit of political engagement revealed that only a third of the public think the system by which Britain is governed works well – with those living furthest from Westminster most likely to be dissatisfied.

As people involved in political activism, we know that most politicians are decent and hard working. The level of anger towards people who have devoted their lives to public service can be hard to compute. But unless we try and understand the problem, our voters will continue to desert us, and Britain’s democratic decline will quicken its pace. We must start talking seriously about democratic reform.

Over the last six months, the Fabian Society has been trying to start that conversation. As well as the focus groups, we’ve conducted consultation meetings around the country and we’ve launched an online discussion forum where hundreds of people have been debating solutions to our current political malaise.

The diagnosis from voters and activists alike seems clear. First, we must make the mechanics of our democracy more open and participatory. That means steps like automatic voter registration, and a greater use of new technologies to make it easier to vote. This should include online voting, when it is proven to be safe and secure.

We must combat the sense that politics is all about dodgy donors and backroom deals. That means real action on lobbying transparency, and renewed attempts to get cross party agreement on party funding. We cannot allow donors to buy policy or influence in a political party, and that will mean, at some point, making the case for increased state funding.

We also need clearer and more accessible information about politics and politicians, and better political and citizenship education. Too many people feel intimidated by politics, and unaware of how they can get involved. Citizenship education in schools needs overhauling, and we need clearer and more accessible information provided to voters at election time.

Finally, we have to do what we can to ensure every vote cast can make a difference, whilst retaining our important constituency links. We can’t argue against the mantra that “there is no point in voting” when over half the seats in parliament never change hands.

At the end of the summer we are going to publish a new charter for democratic reform, which we hope Labour will adopt moving forward. We’ve got an advisory panel of leading Labour activists helping us, but before we finalise it we also want your ideas. Do you think we need a fairer voting system? Do we need Lords reform? Votes at 16? What about online voting? And how do we solve the impasse on party funding? Please log on to our discussion website and tell us what you think.

For too long, democratic reform has been seen as the niche preoccupation of political geeks and Lib Dem sympathisers. Being a “first past the poster” has become a badge of honour, and any discussion of party funding has been dismissed as an attack on the union link. But not only do these views do a disservice to Labour’s long history of advocating democratic reform, they are also dangerously dismissive of the perilous state of our democracy. It’s time to bring democratic reform back into the mainstream of Labour’s political thought, because it is the people we are in politics to represent who are losing their voice.

Olivia Bailey is research director at the Fabian Society. 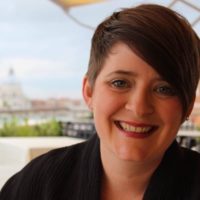