Jeremy Corbyn has called on the party’s top official to bring forward the result of the leadership contest by 24 hours in order to avoid a controversial clash with Labour Women’s Conference.

He has asked Iain McNicol, the general secretary, to re-jig the schedule which currently contains a “deeply regrettable clash” with the traditional Saturday event for female members.

Corbyn, the strong favourite over Owen Smith in the leadership contest, said the announcement of the winner on the same day, September 24, would overshadow Women’s Conference and the party’s long struggle for greater equality in Britain.

A significant number of female members are thought to be unhappy that this summer’s run-off is an all-male affair while Corbyn himself prompted some criticism in September when he initially appointed only men to his four most senior shadow Cabinet positions before going on to promote Angela Eagle – then the shadow Business Secretary – to shadow First Secretary of State.

Last night Corbyn wrote to McNicol to say the timing of the leadership result was “causing me some concern”.

“This is a deeply regrettable clash. The announcement of the winner of the current Labour Party Leadership contest is, of course, not just a huge focus for those within our Party, but also across the nation as a whole and will attract much attention from both national and international media.” Corbyn said.

“It is extremely likely therefore that the concurrence of the two conferences will result in attention being solely focused on the Leadership result, which will massively detract from the Women’s Conference.”

The letter was copied to Angela Rayner, shadow minister for women and equalities. 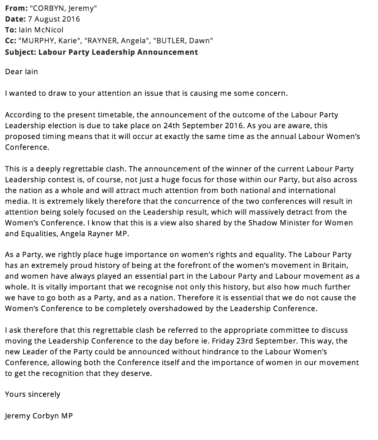