Having read a recent piece entitled catchily “I went undercover at the Labour Party conference, and what I saw left me speechless”, a couple of things jumped out at me.

Firstly, I was amazed at the good fortune the author had in overhearing conversations that perfectly suited their arguments and, secondly, the long list of why people didn’t trust Labour. Trust in politics is low across the board and, whilst a lack of trust isn’t singularly a Labour issue, it is important to understand why this trust is in short supply to better fight back against it and win over a sceptical public.

“Kate Green…told the room that the Labour Party isn’t trusted anymore, without explaining why – seemingly attributing this lapse of trust to the arrival of Jeremy Corbyn. Which is strange, because if you ask most people why they don’t trust Labour, they will respond with one of the following.

An interesting list but, I felt, lacking in a couple of areas that I have seen come up in research conducted over the past year. So I decided to test some of the reasons why people might not trust Labour. I needed to amend some of the wording to above reasons (for purely research reasons) and added in a few more: 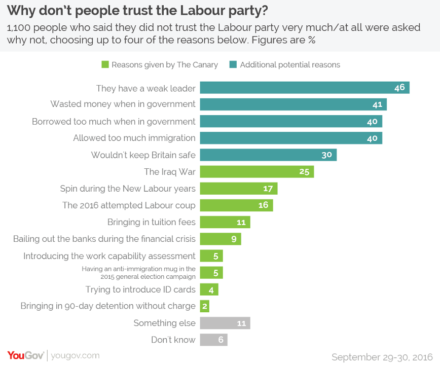 Surprisingly, not a single option suggested by The Canary ranked in the top five, edged out by every single other suggestion made. Indeed, the very thing the author of the original piece criticises Kate Green for (attributing this lapse of trust to the arrival of Jeremy Corbyn) is, well, the number one ranked reason. What the author of The Canary piece found as strange turns out to be true – though weakness of a leader is as much a perception thing as anything else.

This article hasn’t been written to attack the Labour Party, the leader or anyone associated with trying to make Labour electable but there is a huge problem here with trust, not with the Labour Party, but in trusting those who prophesise Labour’s future good fortune based on such a misguided view of reality.

To simply ignore why people say they don’t trust Labour will not help. You have to understand where the public is to take them on and convince them that you understand their concerns. Saying what you hope to be true and ignoring all evidence to the contrary will lead nowhere but, worse than that, it will lead to misdiagnosing the problems and failing to grasp the solutions.

This article also makes no reference to the solutions to these problems I have identified. There will be a Jeremy Corbyn solution to each of these as much as there could be a Tony Blair one but, crucially, there must be a solution to the problems the public say they have with the party. Failure to take them on by wishing it not to be true will lead to oblivion at the next election.

View all articles by Laurence Janta-Lipinski