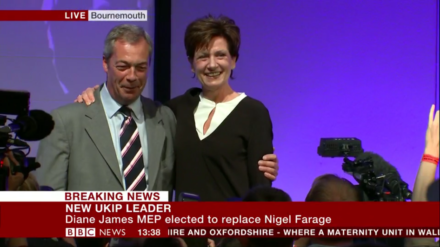 I recently wrote a portrait of Nigel Farage that highlighted his ability to connect with voters. It’s not usual to speak warmly of that man’s talents on a website whose readers despise him, but the tone of the piece was something of an obituary to the party Farage had created, and which appeared to be in decline following the selection of Diane James.

Today it appears our pleasure was premature. Nigel was pulling the strings all along, as started to became apparent at the count, when Diane played second fiddle to a jubilant Farage on the podium. In the previous article I described how Nigel was forced out of his party, but negotiated forcefully, to take down the potential leaders who could replace him. That left Nigel in a position to pick a proxy leader, Diane James, and promote her to his loyal supporters.

We now have an explanation as to why Diane James refused to take part in the hustings, and only spoke to members privately. As former leader, Nigel knew which members were his supporters, especially with several thousand condolence emails following his resignation. It seems that Nigel contacted these supporters, and threw his weight behind Diane. Meetings were organised across the country, but they were never allowed to see her weak performance in a hustings. They trusted Nigel’s recommendation and voted accordingly.

On the day of the vote, the anti-Farage contingent split their votes between the other candidates, while the pro-Farage votes were united behind Diane. Only when she won did they realise she was no leader. However, jubilant Nigel was there, enjoying the limelight, so they could console themselves that they at least had a leader in waiting.

With the anti-Farage contingent demoralised and out-manoeuvred, it shouldn’t take long before the former king is handed back his crown. If that’s the case, then the political masterstroke is complete. Nigel truly is a player. Which leaves Labour in a very tricky position.

UKIP will be present across the Labour heartlands of the north, reminding voters of Jeremy Corbyn’s ongoing support for immigration. As Labour seeks an answer to this, it’s worth considering the recent focus group research by Deborah Mattinson. “While immigration did not emerge as voters’ primary concern, a number of other issues – including pressures on public services and the NHS – were viewed through the prism of immigration.”

With £50m in the bank, Labour would be well advised to conduct further research in order to clarify this point. We especially need to understand why they consider austerity as inevitable. Such information could be crucial in developing an effective counter-argument.

The truth of Nigel Farage is that he is far nastier than he allows people to see. Unlike Moseley, he doesn’t wear a black shirt. He holds a pint of bitter and engages in some jolly banter. We occasionally see his inner thoughts when he overplays his hand, such as the moment he unveiled a poster claiming Britain was over-run, with a picture of a queue of refugees, apparently wanting to enter the country. That was after he had already edited himself for fear of going too far. The truth of his thoughts is carefully concealed.

I live within walking distance of Cable Street, where the dockers’ protest against Oswald Moseley nipped British fascism in the bud. Today we have no marbles to throw under the horses’ hooves. We have little capacity to defeat the forces that divide our society. We are too busy defending ourselves.

The resignation of Diane James is not a day to celebrate. It’s a day to regroup and re-plan. It’s the first day of the future of the Labour Party. Let’s make it a day worth remembering.