It is frequently asserted that Labour should adopt a more hostile posture in relation to immigration in order to reflect the views of its supporters and potential supporters. It is further asserted that this will then allow Labour to ‘win back’ supporters it has allegedly lost to UKIP or the Tories.

The premise of these arguments is false. Labour voters have a net favourable attitude towards immigration*. This means that if Labour were to adopt a more hostile stance in relation to immigration, it would alienate more of its current supporters than it would please them.

In fact, UKIP supporters are the furthest from Labour in terms of their very attitude towards immigration. Conservative voters are the next furthest.

Labour would have to travel a very long distance in order to win any of them over on this particular issue. It is very hard to out-UKIP UKIP on this issue, and the risk would be of alienating large swathes of Labour’s current support.

The party which is next furthest from Labour on immigration is the Tories, who have themselves become more hostile to immigration since Theresa May became leader. Similar caution is warranted about trying to follow the Tories down that road.

SNP and LibDem voters are closer to Labour supporters on immigration, much closer. (The Greens are not included in the chart below, but their supporters have a net 48 per cent favourable attitude to immigration). On this issue they are perhaps the closest to Labour supporters’ views. These are among the voters Labour should find it easier to win over, or win back. 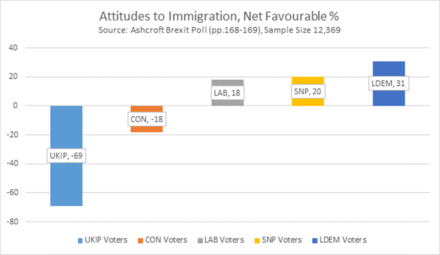 Labour cannot outdo UKIP or this Government on immigration. It should not try. It should pursue its own principled immigration policies which recognises the large benefits of immigration along with some costs.

*Taken from the Ashcoft poll on June 23 on how people voted on the Brexit referendum. As this is was a poll of 12,369 this is the most authoritative of all private polls in the period since the referendum.