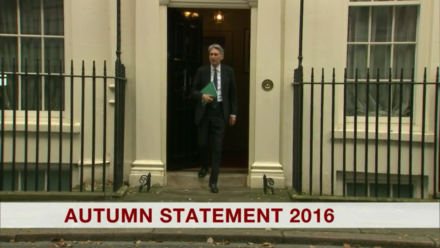 So here’s the very bad news.  Our country looks set to be plunged into debt now totalling £2 trillion. By 2020/1 the UK is set to be a cool £210bn deeper in debt than George Osborne forecast at the time of the March Budget, pre-Brexit vote. That means increase in borrowing of £122bn over the next 5 years. And the Office for Budget Responsibility tells us that £59bn is attributable to the result of the EU referendum.

The Tories are now saying the deficit hole will not be closed until sometime before 2025.  And bearing in mind that the they have been over-promising and under-delivering on deficit reduction for most of this decade, if you believe that it’s going to happen as they plan, then I suggest you apply more carefully the lessons of recent history.

George Osborne was the chancellor who said he would have a surplus, and only ever had a deficit. Phillip Hammond looks set to follow in his mould.  But never mind Osborne, who (to his credit) burnt his political chances to campaign for Remain. The blame for this mess lies squarely with the politicians who made up facts and ignored reality for their own self-aggrandisement.  That would be you: Nigel Farage, Douglas Carswell, Jacob Rees-Mogg, Michael Gove, and the whole rag-tag bunch of Tory MPs who trooped after UKIP spouting their nonsense.

And you too, Boris.

The arguments for Brexit were poor and mistaken at best, and now we have the damage laid bare.

But even if you are unsure about the impact of the nation’s finances on your own, be prepared for 2017 to squeeze most people as real earnings growth plummets next year, according to the OBR’s financial forecasters. The fall in the value of the pound is set to drive up inflation by about two percentage points per year, which wipes out all gains from wage growth. For those at the bottom end of the earnings spread, growth of the so-called national living wage has been revised down. At this rate we will reach just £8.80 by 2020 instead of the £9 all parties promised at the general election.

Is it any wonder people lose faith in politics? Promises made in a referendum not kept. And no one prepared – until the OBR forced the chancellor’s hand – to tell the public the truth about the damage the Brexit vote would do. And here’s the worst. This is before we have left the EU. Lord knows what the future holds if we lose membership of the single market, the customs union, financial services passporting, ease of travel for our visitor economy, access to students for our universities and the myriad other ways Brexit could knacker our chances.

These consequences are so grave that the British economy requires a complete rethink. Those areas in the north of England – many of which voted for Brexit in great number – will be punished the most.  Inequality between the nations and regions will be exacerbated, with London least exposed to the consequences of Brexit. One in 10 people in the north west work in manufacturing which relies on the customs union heavily.  That figure is just one in 100 in London and the south east.

The Labour party cannot stand for this. We owe the British people better.

That’s why Gordon Brown and I have suggested that there ought to be a national constitutional convention on the future of our country.  Not constitutional reform for its own sake but rather a recognition that power concentrated in one or two London postcodes has served people badly.  The economic reality of the nations and regions of our country is disconnected to London.  We have a United Kingdom in name, but in economic terms, there is as much inequality between the regions of the UK as there is between the regions of the EU.

Changing the power structures would give places outside London the power to really plan their economies for the future.  The northern powerhouse was a decent brand, but it never brought with it the power and resources to grow real economic strength.

In the end, in economics, like in life, strength comes from within. Outside London, our cities and towns lack the financial, human and social capital to drive themselves forward.  The disconnection that drove the Brexit vote must be answered with real power.  Not the skewed version of Britain that Westminster represents, but power on equal terms, so that the correct choices can be made for regions outside the south east.

The risk is that without such a re-balance of power, the future of our country will still be dictated by a few who have little personal stake in our nations fortunes, and care only about their own self-importance.