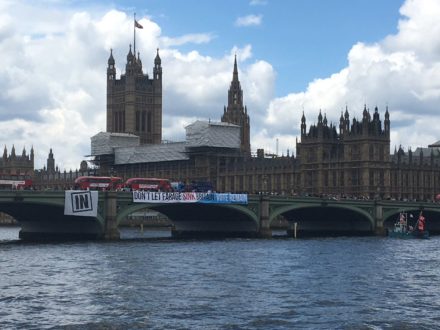 The Corbynista group which ran its own festival during Labour conference has announced plans for a series of Brexit debates which it has dubbed “take back control”.

The World Transformed, which put on Momentum’s fringe festival at Labour’s annual gathering in Liverpool, will run the events in March to coincide with the triggering of article 50.

Organisers said the political and cultural sessions will take place around the country with a focus on marginal seats and areas with a high Brexit vote.

The group plans to work with constituency Labour parties (CLPs) and local Momentum and trades union groups to shape the nature of the debate surround Britain’s place in the world.

They aim to bring together both Remain and Leave voters and will tackle issues such as immigration, national identity, democracy, the economy and the future of Europe.

“Theresa May claims ‘Brexit means Brexit’. But this empty phrase has been used to hide the fact that the government is in chaos,” said Lotte Boumelha, an organiser for Take Back Control.

“Many people, both leave and remain voters, have felt dis-empowered since the referendum and shut out of the debate. Take Back Control will be about reclaiming the narrative and opening up the negotiations.

“This is our Brexit. We should get to decide what it means and what it will look like. And while Theresa May has only a majority of 14 MPs – she will have to listen to us.”

Charlie Clarke, also from Take Back Control claimed that the group wanted to respond to the public revolt against “politics as usual” which has delivered the Brexit vote, Donald Trump’s election as US President and Jeremy Corbyn’s re-election as Labour leader.

“Individuals have felt powerless for decades, and are starting to re-assert themselves. But taking back control is not the preserve of the right. We want to see a Great Britain that takes power back from the economic elites Trump and Farage belong to. One that demands a more democratic voting system. A more balanced, plural media that isn’t owned by billionaires. A political system where all the decisions aren’t made in Westminster. A society where people aren’t overworked, underpaid and weighed down with debt, rent and spiralling bill payments.”

In the wake of Trump’s shock election victory, Corbyn himself tried to reclaim the “take back control” slogan – popularised by Brexit campaigners – from vested Tory interests.

“We won’t tackle the damage done by elite globalisation just by leaving the EU,” Corbyn said a fortnight ago.

“”We won’t ‘take back control’ unless we take on the corporate vested interests that control our energy, our transport and have infiltrated our public services.

“One thing is for sure: neither billionaire Donald Trump nor the billionaire-backed Tories have any interest in giving people back control.”