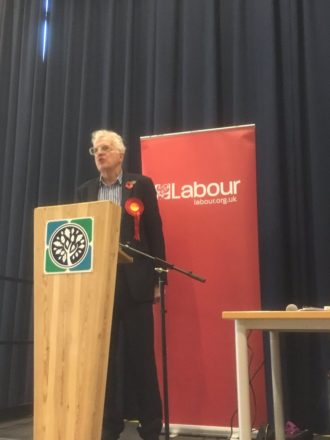 Labour’s candidate in Richmond Park faces one of his last chances to win over swing voters tonight when the final hustings takes place.

Christian Wolmar, the author and rail expert, will take on Zac Goldsmith, standing as an independent, as well as Sarah Olney, the Lib Dem candidate at Duke Street Church in Richmond.

Labour activists have been in high spirits, and were buoyed by a visit from Jeremy Corbyn at the weekend, and have also received support from Diane Abbott, the shadow home secretary who praised Wolmar as “fantastic”, and John Healey, the shadow housing secretary. By contrast, Goldsmith has been helped with doorknocking by former Tory colleague and follow Brexiteer Jacob Rees-Mogg.

Yesterday Wolmar received a boost when a group of local Green Party members in south-west London told colleagues to vote for him in defiance of national leader Caroline Lucas, who had called on supporters to back the Lib Dems.

“We hope that voters in Richmond Park will remember the Lib Dems’ regressive role with the Tories in government: putting austerity into practice; enacting the bedroom tax; and raising university tuition fees after they promised to scrap them”, wrote seven Green members, including the Kingston and Surbiton candidate in the general election, in a Guardian letter.

Separately yesterday Crowdpac, which maps political positions, published its assessment of the stances for the four main candidates in Richmond Park, awarding Wolmar high ratings on “liberty” and “left”.