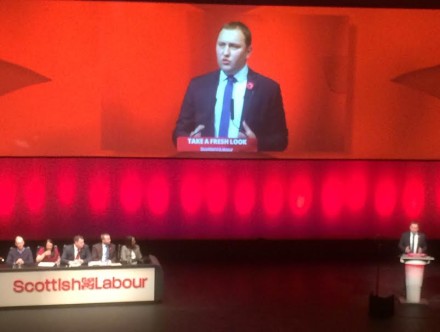 This is the full speech delivered by Ian Murray, Scottish Labour’s Westminster spokesman, at the party’s conference, which opened this morning.

It’s great to be back here in Perth, and I’m delighted to be opening this debate on federalism and the future of our nation.

The motion before us sets out Labour’s radical solution for our country.

A new UK People’s Constitutional Convention, to give voice to, and to democratically empower, the citizens of this country.

Conference, I know that many in this hall would rather be focusing on today’s issues.

How we eradicate poverty, create jobs, fund our public services and create a better future.

Yet here we are once again talking about the constitution.

I think there are three reasons for this, which I will set out now.

The first reason is fairness – specifically fairness between generations.

We have become used to a set narrative of things improving from each generation to the next – with higher average incomes and higher living standards.

Now – as the Resolution Foundation has observed – our assumptions about rising incomes and higher living standards are being disrupted.

The current generation is projected to be the first in modern times that is on average less well off than the last.

We should not accept this.

We must ensure that each successive generation has the opportunity to flourish and prosper.

The second is inequality.

Political power is concentrated in the hands of a few, when it should be shared by the many.

People across the nations and regions of the UK feel disenfranchised and detached from the political process.

Brexit lifted the lid on these feelings but it did not create them.

We saw them in the aftermath of the financial crisis, the expenses scandal, and the Scottish independence campaign.

This must be addressed.

Because, conference, if we on the left fail to address it, the only winners are the right and the forces of nationalism.

The third reason, conference, is the competing ideological nationalisms of the SNP and the Tories.

The SNP’s obsession with constitutional politics comes as no surprise.

For the SNP, the independence referendum was not the end – a once in a lifetime opportunity – but the beginning.

The Nationalists never accepted the result. They went back to the drawing board and produced a list of potential triggers for another referendum the length of your arm.

But then that’s what nationalists do. The fight for independence is what gets them out of bed every morning.

Conference, we will not create a better future – for ourselves, our families, our communities – by cutting the bonds that unite us. Rather, we must act to strengthen those bonds.

And that brings me to the SNP’s enablers – the Tories.

It is they who are really responsible for this current mess – Nicola Sturgeon’s mibbaes aye mibbaes naw referendum.

Thanks to them, the constitution has barely been off the agenda since the early hours of September 19th 2014, when David Cameron stepped out of 10 Downing Street and unveiled English Votes for English Laws. (A policy once advocated strongly by the SNP).

That was followed by a pernicious general election campaign, which stoked the embers of English nationalism and placed voters in England and Scotland at loggerheads.

And who can forget the election in 2015, when Ruth Davidson and her Tories went enthusiastically around the country riding on a manifesto that pledged a referendum on the EU?

It is Brexit, more than anything else that has destabilised the UK.

And while the Tories keep saying Brexit means Brexit, I say Brexit should never mean a hard Tory Brexit.

I voted against that and I will continue to oppose it every step of the way.

Yet, 12 months after facilitating Brexit, Ruth Davidson was in my constituency, and yours, and her own, telling Scots that the Tories were the only party that could stand-up for the union.

A lie then and a lie now. Turbo-charged post-truth politics.

Conference, in the SNP and the Tories, we have two parties, diametrically opposed, neither standing up for Scotland.

And so it falls to the Scottish Labour Party, as it has done so often, to deliver for the common ground. It falls to our leader, Kezia Dugdale, to speak for the majority of people in our country.

Conference, Kez has blazed a trail in recent months, standing up for our party and for the people of Scotland in these increasingly turbulent times.

Kez: we thank you for everything you do.

The party – and the country – is behind you as you seek to heal the deep divisions in our society.

Our party wants what Scots want and what they voted for – Scotland thriving as an integral part of the UK while having close ties with our neighbours and friends in the EU.

Along with addressing the other problems set out above, this is what the motion before us today seeks to achieve.

Our vision – the Scottish Labour vision – is for a radical reshaping of the UK that offers a post-Brexit solution that delivers for the four corners of these islands.

It is time for a new Act of Union – it has been 300 years since the last one – one that is fit for purpose in the 21st century.

The federal solution we propose would renew and refresh our ailing democracy, and give a voice to those who feel they have none.

It would allow us to mitigate the failures of the past, and lay the foundations for a better future.

And it would uphold the democratic will of the Scottish people: a strong Scotland in a secure United Kingdom, with a close relationship with Europe.

Under our proposals, every component part of the United Kingdom would take on more responsibility for what happens in their own communities, while maintaining the protection of being part of a greater whole.

We would enhance the legislative scope of the Scottish Parliament, by repatriating powers in devolved areans that will return from Brussels in the coming years.

And we would transfer powers over workers’ rights and the minimum wage to the Scottish Parliament.

The UK would set minimum standards for the whole country on which Scotland could build if it chooses.

And a floor for the ational minimum wage, with the exact level determined in Scotland.

However, our vision is not prescriptive.

The people will decide how they wish to be governed, in a people’s constitutional convention involving citizens and civic institutions across the UK.

In the long run, that would mean more power, more autonomy, and more accountability for Scotland (and for Wales, Northern Ireland and the English regions).

What it would not mean, conference, is full fiscal autonomy.

The fiscal and currency union, first introduced by the 1707 Act of Union, allows for the redistribution of financial resources across the UK.

This pays for our pensions, underpins our social security system, and ensures that those individuals and families who need additional assistance receive it.

Thanks to this pooling and sharing of resources, which is based on need, not nationality, per capita spending in Scotland is £1,200 higher than the UK average.

Dismantling this redistributive system, as the SNP and right wing Tories have advocated in championing full fiscal autonomy, would be financially disastrous for Scotland.

It would expose us to a £15bn budget deficit – substantially more than the £11bn that has been cited as the potential cost of Brexit.

Maintaining the fiscal union, and the Barnett Formula that benefits spending in Scotland, is an integral part of our plan.

Meanwhile – and I want to make this absolutely clear, in case Nicola Sturgeon is listening –

The SNP has absolutely no mandate for another independence referendum.

And if they try to push one through, Scottish Labour will oppose it in the Scottish Parliament.

Conference, the vision before you today is one of hope and optimism.

And it will re-forge our democracy and our society and safeguard it for the future.

This is an historic moment for our party.

The party that stands up for what the majority of people in Scotland want – firmly, unquestionably opposed to independence, but also opposed to the status quo.

The party that believes together we’re stronger.

Today our country is deeply divided, not just by constitutional politics but by economic inequality.

To restore faith in our politics, to build a more united society and create an economy that works for working people, we believe that we need to create a more federal UK.

As the motion before us states:

“…we call for the UK Labour Party to convene a people’s constitutional convention, made up of citizens from across the United Kingdom, and to report before the next UK General Election.”

Conference, I urge you to back this motion, and join us on the path to a brighter future for Scotland and the UK.