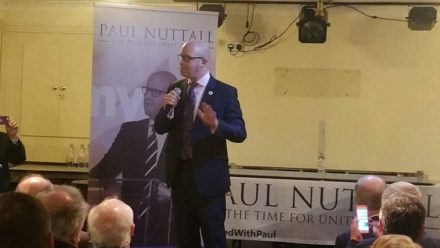 Despite the UKIP-dominated Brexit campaign resulting in our imminent departure from the EU, the notion that the “Little Englander” party is going to vanish is plain wrong. UKIP’s new leader, the working class university-educated  Paul Nuttall, has made clear they want a Brexit government and Brexit town halls. An authoritarian and populist character, and conservative in his outlook, he has Labour in his sights.

In the Euro elections in 2014 UKIP topped the poll, gaining over a quarter of the popular vote, and electing 24 MEPS. In 2015 UKIP won the support over almost four million people. UKIP came second in over 60 Labour held-seats. In the north east it achieved 19 per cent of the vote. It has over 500 councillors, eight Welsh Assembly members, one MP and four members of the Lords. In the EU referendum 70 per cent of “Old Labour” voters from the council estates backed Brexit in their droves from Cleator Moor to Cockermouth in West Cumbria..

For academic Mathew Goodwin the strongest levels of support for UKIP are in places where Labour is struggling – ‘’Northern, left-behind and traditional Labour seats like Copeland, Doncaster, Dudley, Bolton, Leigh and Rotherham’’, he wrote.

In June 2016 eight of 10 voters in middle-class Keswick backed Remain compared to seven out 10 voters who backed Leave in the less affluent coastal town of Whitehaven. Feeling excluded, millions of working class electors came out – some for the first time to give the “political elite” a black eye which went beyond Euroscepticism, or latent racism. As Goodwin notes, they are the direct victims of globalisation, austerity and economic inequality.

The radical and far right are getting an electoral foothold on several public bodies across Europe and America. For academics like Goodwin and Rob Ford the real risk for Labour in its northern heartlands is that it becomes productive and fertile territory for UKIP in the wake of the referendum. Some 67 per cent of Brexit voters would consider voting UKIP in the future and the party’s new new leader with a “racialised” campaign strategy could rob the North and Midlands of scores of Labour MPs and councillors.

There is compelling evidence that Labour’s working class vote is haemorrhaging to UKIP. In the urban coastal town of Hartlepool, the eurosceptic party took a Labour seat with 48 per cent of the vote in a council by-election. The trend began under Tony Blair’s New Labour in 2001. Although winning big, Labour lost three million of its former traditional working class voters. Most stayed at home while a significant minority backed the extreme-right BNP. By 2012, UKIP had filled the vacuum with a populist programme.

Since Jeremy Corbyn became Labour leader this process has continued. As Goodwin argues, “Corbyn has shown little understanding of what is driving this and has said little that would resonate amongst Labour-to-UKIP defectors” despite promising to reconnect with these voters.

Goodwin argues convincingly that England’s third-biggest party is getting its support from the low-income, cash strapped, insecure white working-class precariat and the self-employed. These people feel alienated from a London-centric Labour. Historically, Labour the voice of working people and their families, has in the in last decade or so become increasingly gentrified: it has become middle-class in terms of its active membership, representation and leadership.

Moreover, some of these voters must put up with the a latte-sipping liberal culture which seems far from their values and lifestyles. Whilst Labour’s core vote adores Mrs Brown’s Boys, the chattering classes are more at home with a televised Jane Austen costume drama. Northern hummus has failed to blend with guacamole.

Immigration remains the top policy issue for many post-Brexit. Of-course, migration has brought huge socio-economic advantages to our region. Yet those who feel threatened by it are not professionals, but disaffected, insecure blue-collar workers some on zero-hours contracts. To the left-wing economist, Paul Mason, high unskilled immigration benefits employers by making labour cheap. As the charity Hope not Hate has pointed out, going into urban neighbourhoods with just an anti-racist message will not work. It does nothing to alter the level of mistrust or anger felt by many working class citizens. Often it reinforces a sense of being patronised and treated as ill-educated.

Furthermore research by Jon Cruddas notes that millions of working-class Labour voters feel they are losing their cultural identity of being English. This group cares more about community, belonging and solidarity rather than progressive causes. These are the very people who Labour is in serious danger of losing to Nuttall’s rejuvenated UKIP. They are socially conservative, value home, family and nation. “Corbyn’s cosmopolitan views on migration, the monarchy and the armed forces are likely to have exacerbated this disconnect,” Cruddas argued.

To survive as major political force Labour needs to bridge the gap between its leadership team and volatile electoral base. This will be no easy job as Labour emerges from a divisive leadership contest. It will require long-term detailed work. If Labour is at all serious in combating the politics of powerlessness and grievance, and see UKIP off, it must win back the hearts and minds of millions of blue-collar workers. It must re-engage with the “left behind” communities in post-industrial areas like Teeside. The party risks becoming unelectable if it fails to face up to the greatest challenge in its history. To do otherwise is to risk the emergence of the extreme right in the north’s de-industrialised towns in the next decade and the Conservative Party as the natural party of government.

Stephen Lambert is director, Education4Democracy. He is a Newcastle city councillor and writes in a personal capacity.