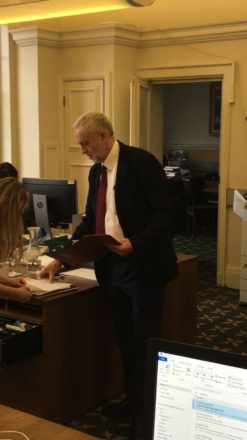 Jeremy Corbyn is to lose some key staff members, as a row on whether he has sufficient staff was cleared up by the party’s national executive committee.

Three aides are to leave the leader’s office, including head of stakeholder engagement Jayne Fisher, who joined his team in January after working for Sinn Féin’s London office for ten years.

Matt Zarb-Cousin, Corbyn’s media spokesperson, is stepping down to return to his previous work at the campaign for fairer gambling. He has worked with the Labour leader for a little under a year.

Nancy Platts, a former PPC for Brighton Kemptown, will no longer be the trade union liaison manager. She will take up a role with the social enterprise Campaign Collective.

Simon Fletcher resigned his role as campaign’s chief for the leader last month, and economic policy lead Mike Hatchett left earlier this month to return to the civil service.

A rumour emerged with some fearing that the leader’s office was understaffed and underfunded by the party. At a meeting of the NEC, this was quashed – with Corbyn’s office having 28 staff members, and four vacancies at present. At the same point in the electoral cycle Ed Miliband had 25 staffers. This rose to 28 during the general election.

PoliticsHome also report that David Prescott, son of the former deputy prime minister John Prescott, will no longer serve as Corbyn’s speech writer, with these duties now to be done by Seamus Milne, head of communications and strategy, and Andrew Fisher, policy adviser.

Prescott will continue to work for Corbyn’s team, with responsibility for shadow cabinet messaging.