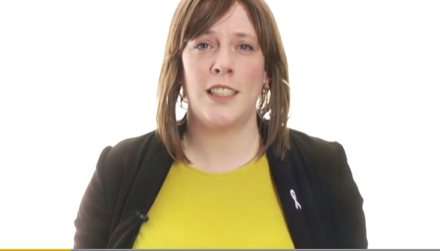 Jess Phillips was as outspoken as ever when I sat down with her to talk about politics, feminism and her excellent new book Everywoman.

Phillips gained prominence when she told Diane Abbot to “f*** off” at a meeting of the Parliamentary Labour Party, but she has used that notoriety to highlight issues close to her heart, particularly violence against women. She remains an outspoken critic of Jeremy Corbyn and believes the Labour party currently has a problem with winning.

“At the moment, for some in left wing politics, just moaning about what other people do is the natural habitat of those people.”

“I think that that is the same problem of the very far right: what UKIP do to great success, is just moan – they don’t offer any great solution. I worry about this moaning politics, and not being the ones who have to make some difficult decisions, do actual work and pull your finger out, basically. There is this airy-fairy-ness about the left at the moment.”

For Phillips, this moaning is all too often directed at the working class.

“If I have to listen to somebody, especially in the left, talking down the views of working class people, because they’re stupider than them – I’m going to hit someone with a whole heap of my hardback books. I’m going to start throwing them at people. We stupify the nation, as if righteousness is the end result. Power is the end result. Its our fault for not leading them somewhere better, its totally our f***ing fault.”

“We spoon feed people like they’re stupid, and we think that working class people can’t take a bit of challenge. Obviously you’ve never eaten dinner round my house, where we constantly challenge each other. My grandparents used to say mildly racist things. We didn’t ever just say ‘Oh well you know we respect your opinion.’ We challenged it.”

“We’re all guilty of it – the paralysis of popularity – where we react as opposed to lead, and that’s true of all, there’s a complete vacuum of political leadership in the UK today, across all political parties. That is the death of politics in my opinion.”

One way Phillips believes Labour can offer leadership is by promising to liberate the potential of women in Britain. If there were childcare mandated across the country, under the next hypothetical Labour government, she thinks that the impact would be “massive”. “There would be a massive increase in the productivity of our nation, a huge leap for two reasons.

“One that people could go to work – productivity, its quite important if you can go to work, you need to get out of the house and also – the investment.”

“In the same way that you invest in all other industrial strategy, this would create masses of jobs for women. If you look at countries like France, where they have it, they have the highest productivity in Europe.”

With international women’s day approaching, I ask her about her famous speech last year, where she listed all the women murdered through domestic violence in the year before. I question how it is that we’ve become so used to this, and so generally accepting of it.

“Unfortunately we’ve become completely desensitised to it, and we still also think that there’s more to the story than just male violence against women.”

“And we do that to protect ourselves.”

“We do that to think that this couldn’t happen to us. It is so suburban, these murders are so suburban, they are literally happening in every town that we all live in. Terrorism or football hooliganism, these incidents that happen are happening over there, and they’re a thing that opinion piece writers can have a thing about.”

In this year’s international women’s day debate in the House, Phillips included Jo Cox on her list of women murdered by men.

“They seem like other, so people can be horrified and shocked – and even Jo’s murder, even though it was male violence against women, there is this tragedy of otherness.”

“Of course, Jo’s death didn’t seem like a tragedy of otherness to those of us in parliament, it felt like being hunted, and still does, but dealing with it like it could happen to you or someone in your family is much harder.”

“It’s the same reason that we blame the victim in those circumstances, because we have to be able to convince ourselves that it couldn’t happen to us. That she must have done something.”

I ask Phillips about the abuse Abbott has recently spoken out about and whether the Labour leadership takes the issue seriously enough.

“If anyone, in my name abused her, saying ‘Jess Phillips was f***ing right you f***ing bitch, I hope you die.'”

“If somebody sent that to me, I would single out that person personally, and say, never ever use my name like this, this is totally unacceptable. I’ll report you and you’ll be got rid of from the party.”

Corbyn often says in response to female MP’s complaints of abuse that it happens to him too, which Phillips dismisses as a simple “what about the men” distraction.

“And that’s what Jeremy Corbyn should do to every person who abuses me in the party, every single one”.

Jess’s book Everywoman is out now.