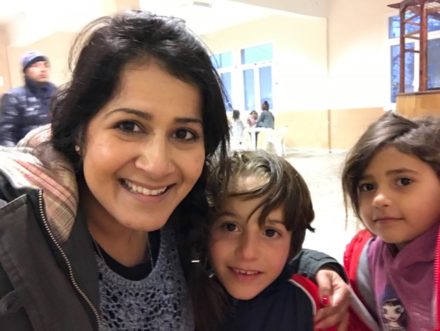 Last month I took the decision to go and visit a refugee camp in Northern Greece. Two things motivated me to do so, firstly my desire to support those in a desperate situation and secondly a sense of responsibility. The problems in Syria and the resulting refugee crisis have dominated national and, at times, local politics but very few have an understanding of the true situation and the realities that people face. As a politician, representing an area where the issue has often been debated, I felt I had a responsibility to understand it for myself. Volunteering with a NGO, set up in Britain, Refugee Support, I spent two weeks in a small Greek town called Alexandreia. Greece has over 60,000 refugees in total, with the smaller camps such as the one in Alexandreia hosting approximately 500 refugees, but larger camps supporting more than 5,000 refugees at any one time. My role ranged from cleaning or sorting clothes in the warehouse to helping in the kitchen and teaching English.

The camp itself is a converted army barracks and like most camps in Greece is administered by the Greek Army, although it is the various NGOs on site that provide much of the broader support and care. In Alexandreia the UN were present and had set up families with containers that could then be fitted with gas canisters for heating and portable lights. There is no running water in the containers, no cooking space and no permanent heating, but they still provide a luxury that is not offered in other camps, where many people are living in tents. The UN had also invested in clean showers and toilets for the residents where previously the hundreds of refugees had shared a handful of toilets between them, in less than hygienic conditions.

Refugee Support (the NGO I was volunteering with) had played a big role in improving things on the camp since it was set up almost a year ago. A small playground had been set up for the many young children who had been getting increasingly bored and had resorted to throwing stones. The charity had also worked to open the disused kitchen and with support from one of the refugees who had previously run a restaurant in Syria, they began providing camp residents with hot Syrian food six days a week. A move which had made a significant difference to the lives of the residents. A boutique also existed on camp, where each month refugees could come and choice select items of clothing, at an allotted time and day. Similarly, an on-site shop offered a selection of groceries which could be bought using a points based system.

But while these people may now be in safety the story does not and cannot end here. Some have left behind comfortable lives in Syria, having previously run businesses, worked as teachers or civil servants. The thought that you can be going about your daily life and in a moment it can be turned completely upside down is a really sobering one. For the most part the camp residents are up-beat and resilient even though many have been through incredibly harrowing experiences, but there are times when the reality of their situation hits home.

For instance there was Sadam, a young refugee volunteering in the camp kitchen, he had previously worked in the family business based in Aleppo and was eager to find a trade. He introduced many of the volunteers to Arabic music and was great fun to work with. But on his 21st birthday he seemed subdued and distant wondering how things would have been if he had been back at home. Similarly, I met a young sixteen-year-old girl at a women’s empowerment class run by the IRC. She was excited to tell me how she planned to travel to Germany to be with her mother and uncle, after they had been separated when fleeing Syria. I asked her how long it had been since she saw her mum and she burst into tears as she said it was almost two years.

Many of the refugees in Alexandreia have been there for nearly ten months, having previously gone through harrowing conditions to get to Greece in the first place. But it was only while I was there, that the children on camp were offered schooling for the first time. Following much negotiation with the authorities it was agreed that local schools would open for longer in the afternoon to support the children. While this was a welcome move it had taken a long time to come and there was still no scope for integration with Greek children. In fact, while the country has received large amounts of funding from the European Union to support the cause, the Greek economy is still suffering and it is impossible for them to sustain the numbers. And yet the EU has only met 5% of its target of settling refugees from both Greece and Italy.

Only thirty of the 196 UN members have agreed to resettlement, but many of these like Britain have slowly started to turn their back. The United Arab Emirates, Saudi Arabia, Qatar, near neighbours to Syria, have sadly taken at best a handful of refugees and at worse, none. And other European countries, facing internal pressures on immigration, have also started to view the issue with caution. Disappointingly as one of the top ten richest economies in the world, Britain has done nowhere near its fair share and the recent decision by the Tories to stop unaccompanied child refugees and those seeking family reunification, as detailed by Lord Dubs’ amendment to the Refugee bill, is nothing short of disgraceful. Yvette Cooper’s work on the situation has been exceptional but the government must do more and pressure cannot stop.

The situation may no longer dominate the media headlines, but the crisis continues. Our responsibility cannot and must not end here, and we must take the lead in ensuring we protect some of the most vulnerable, as well as put pressure on others to do the same.

More information on Refugee Support and the work they do can be found here.

Naushabah Khan is a Labour councillor in Medway and a former parliamentary candidate.