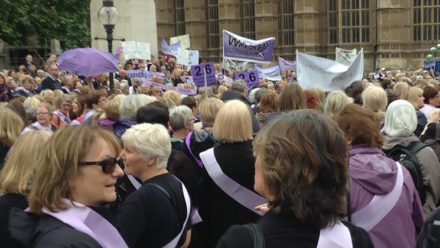 Jeremy Corbyn has joined a shadow minister and a trade union leader in a show of support for women who have been left worse off by pension changes before a key rally today.

The reforms to the state pension affect some women born in the 1950s as part of the move to equalise pension ages for men and women to 65. However, many were not warned that it would effect them, so were left worse off and with little time to prepare for it.

Corbyn said in a statement that the changes are a “betrayal of tens of thousands of women who had planned for their retirement based on the 1995 legislation.”

Yesterday, Chi Onwurah, the shadow minister for industrial strategy, presented a petition to parliament on WASPI women, urging the government to think again on the changes which are affecting women financially.

Unison are rallying outside of parliament this afternoon, and will then lobby MPs in the House of Commons.

Dave Prentis, Unison’s general secretary said: “No-one should have lost out financially because of changes they weren’t told about. The government should stop looking the other way and come up with a plan that compensates the millions of women hit by the move.”

“Women who’ve retired or who are nearing retirement shouldn’t be experiencing financial hardship through no fault of their own. Had ministers been more on the ball at the time, the women could have put aside extra money to see them through into their old age.”

“International Women’s Day is the perfect opportunity for the government to put right this historic pensions wrong.”

Leigh #WASPI are fighting for women everywhere against unjust treatment. Proud to welcome them to Parly on #IWD2017. pic.twitter.com/FLeobM76uB

Looking forward to a meeting with #Waspi women today. #JUSTICE