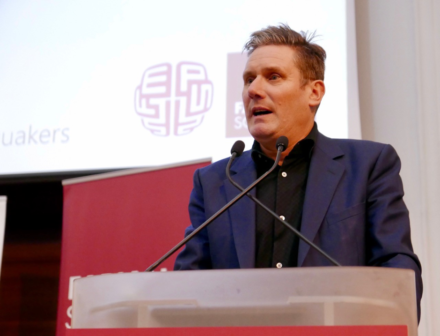 This is the full text of the speech that Keir Starmer, shadow Brexit secretary, gave today making clear Labour’s position on Brexit going into the general election.

At this election there will be a very clear choice on the ballot paper.

A choice of two visions of Brexit.

Labour’s approach to Brexit will be based on our values: internationalist. Outward looking. A belief that we achieve more together than we do alone.

We accept that outside the EU our relationship with Europe must change.

Labour believe in a very different vision of how Brexit can work for Britain and the EU.

We believe in building a new relationship with the EU – not as members but as partners. Where jobs, the economy and retaining the benefits of the Single Market and the Customs Union are our priority. Where hard-fought workplace rights and the environment are protected. Where we are an open, outward looking country. Where EU nationals living here are guaranteed their rights and can live in certainty that Brexit will not affect them.

A Brexit that brings the country together, radically devolves power and supports all regions and nations of the UK.

That’s the approach to Brexit I will set out today.

A Labour Government would reset the Tories failing approach to Brexit.

We will scrap the Government’s Brexit White Paper and replace it with fresh negotiating priorities that reflect Labour values and our six tests.

Labour’s White Paper will have a strong emphasis on retaining the benefits of the Single Market and the Customs Union as we know that is vital to protecting jobs and the economy.

Our White Paper will make clear that jobs and the economy are Labour’s priority throughout – whereas the Conservatives are willing to put this at risk.

That means we will seek: continued tariff-free trade between the UK and the EU, no new non-tariff burdens for business, regulatory alignment and continued competitiveness for goods and services.

And rather than focusing on hypothetical new trade deals with other countries, Labour will focus above all else on securing strong trading arrangements with the EU. After all, the EU accounts for 44 percent of our exports and is by far and away our most important trading partner.

It is extraordinary that we have a Prime Minister who has given up on the Single Market and the Customs Union even before negotiations have begun, but is so willing to talk up the chance of there being no deal reached.

It would cause huge damage to British businesses and trade, including likely tariffs of 30-40 percent on dairy and meat producers, 10 percent tariffs on cars and a loss of passporting rights for financial services. No wonder the CBI have called it a ‘recipe for chaos’.

A Labour approach to Brexit means ending this reckless approach.

It means making clear to our EU partners that we will seek to negotiate strong transitional arrangements as we leave the EU and to ensure there is no cliff-edge for the UK economy.

It means rejecting no deal as a viable option – a move that will give greater certainty for investors, workers and businesses.

We will also approach negotiations in a completely different way to the Tories.

Where Theresa May wants to shut down scrutiny and challenge, Labour will welcome it. We will work with Parliament, not against it.

Because on an issue of this importance the Government can’t hide from the public or Parliament.

A Labour approach to Brexit means legislating to guarantee that Parliament has a truly meaningful vote on the final Brexit deal.

It means regular reporting back to Parliament on progress in negotiations and it means working with the devolved administrations to reflect specific and particular concerns.

A Labour approach also means rebuilding relations with our EU partners, because striking a good deal for Britain relies on having alliances across Europe.

We will make clear that we will seek to build a close, collaborative future relationship with the EU.

Not as members, but as partners.

This will involve continued cooperation in a whole range of areas from counter-terrorism to higher education; culture to climate change.

So a Labour Government will seek to remain part of the Erasmus scheme so that British students have the same cultural and educational opportunities after we leave the EU.

We will ensure the UK maintains our leading research role by staying part of Horizon 2020 and its successor programmes, and by welcoming research staff from the EU.

We will seek to maintain membership of or equivalent relations with European organisations which offer benefits to the UK, such as Euratom, the European Medicines Agency, Europol and Eurojust – two agencies I worked closely with as DPP.

A Labour approach to Brexit means rejecting Theresa May’s argument that as we leave the EU, we must also sever links that have served the EU and the UK well for decades.

A Labour Government will also mean a new approach to how we treat EU nationals in the UK.

It is shameful that the Prime Minister rejected repeated attempts by Labour to resolve this before Article 50 was triggered. As a result, 3 million EU nationals have suffered unnecessary uncertainty, as well as the 1.2 million UK citizens living in the EU.

EU nationals do not just contribute to our society: they are our society. And they should not be used as bargaining chips.

So on day one of a Labour Government we will immediately guarantee that all EU nationals currently living in the UK will see no change in their legal status as a result of Brexit, and we will seek reciprocal measures for UK citizens in the EU.

So I can assure you today that policy will be in Labour’s manifesto.

And we will also set out in further detail how we will reset Britain’s approach to Brexit and prevent a reckless Tory Brexit.

Firstly, we will drop the Tories’ Great Repeal Bill.

The EU has had a huge impact in securing workplace protections and environmental safeguards. That was one the main reasons Labour and trade unions campaigned to stay in the EU.

But we all know that for many Brexiteers in the Tory Party, this was why they wanted to Leave.

It’s why Priti Patel – now in the Cabinet – spoke during the referendum of wanting to ‘halve the burdens’ of ‘EU social and employment legislation’.

A Labour Government will never consider these rights a ‘burden’ or accept the weakening of worker’s rights, consumer rights or environmental protections.

So instead of going ahead with the Tories’ Great Repeal Bill we will introduce new legislation – an EU Rights and Protections Bill.

This will make sure that all EU-derived laws – including workplace laws, consumer rights and environmental protections – are fully protected without qualifications, limitations or sunset clauses. We will work with trade unions, businesses and stakeholders to ensure there is a consensus on this vital issue.

A Labour approach to Brexit will ensure there can be no rolling back of key rights and protections.

And we will go further, because protecting existing rights can never be the summit of our ambition. A Labour Government will work with EU partners, trade unions and businesses to ensure that, outside the EU, the UK does not lag behind Europe in workplace protections or environmental standards in future.

We will also make sure that there is rigorous and independent scrutiny of any new powers this gives to the Executive, because Brexit cannot result in a power grab by Whitehall.

This brings me to another commitment we will have in our manifesto: a presumption that any new powers that are transferred back from Brussels should go straight to the relevant devolved body.

This will apply to regional government across England, as well as to the devolved administrations in Scotland, Wales and Northern Ireland.

This was a proposal included by the Mayor of London in his Brexit White Paper and it is one a Labour Government will take forward.

A Labour approach to Brexit will be part of a radical extension of devolution, and will help bring the country together.

A Tory Brexit will push the country further apart and lead to a concentration of power in Whitehall.

A Labour approach to Brexit will also contribute to how we rebuild a fairer, more progressive country.

The debate over Brexit is not happening in a vacuum.

It will be shaped by the approach the Government you elect takes to a whole range of wider issues – security, taxation, public services, the environment and education.

The Tories see Brexit as a way to further their wish to deregulate the economy, slash corporate taxes, water down workers’ rights and remove Britain from anything and everything European.

But a Labour approach to Brexit will help ensure we have a fairer society, a strong economy, robust workplace rights, action on climate change and a more international, outward looking nation.

We need a Labour Government to deliver a real living wage – giving a pay rise to over 5million people – invest in public services and tackle the crisis in housing, the NHS and our schools.

That choice is on the ballot paper at this election.

If Theresa May wins another 5 years in power, she will take it as a green light to side-line Parliament, ignore opposition and drive through a reckless Tory Brexit.

She will isolate us from our nearest partners and strike trade deals with any country that will talk to us – no matter the consequences for workers’ rights, environmental protections or our place in the world

The only way to stop that and to build a fairer Britain is to elect a Labour Government.

A Labour Government who will reset our approach to Brexit, rebuild relations with the EU and make sure that jobs, the economy and rights come first.

We have 6 weeks to make that case.

View all articles by Keir Starmer