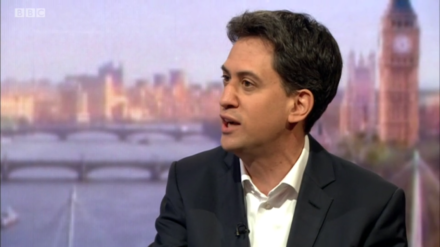 Ed Miliband has opened up about his reaction to Labour’s general election defeat and described the “terrible” moment in which an exit poll showed David Cameron would be returned to Downing Street.

Miliband, who resigned as leader immediately to return to the backbenches, said the days after the 2015 election were “very upsetting” but said he had subsequently found solace from the Britons he met who have backed his ideas.

The Doncaster North MP, who beat his brother David to Labour’s top job in 2010, also defended the reforms he made to future leadership contests which paved the way for the election of Jeremy Corbyn.

When asked by the BBC if he cried at the election result, Miliband said: “No, I don’t recall. It was very upsetting. The days afterwards were very upsetting days.”

Eddie Mair – was deputising for the host on the Andrew Marr Show – asked him if he was depressed at that point and Miliband said: “I wouldn’t describe it that way. It is hard, very hard – hard as I watch was happening to the country.”

“I was hopeful we would win, sure,” he said.

Miliband made a quicker return to the Commons than many losing party leaders and was credited for not “sulking” in the aftermath of the vote.

Since then he has avoided strong criticism of Corbyn but backed Owen Smith in last summer’s leadership election.

Today Miliband said he had found support among the reaction of voters as he continued his work as a backbencher.

“I tell you what has been one of the biggest pieces of solace for me is the British people – sometimes I end up comforting them, when people say to you, ‘when that exit poll came out, wasn’t it terrible?’…  People saying ‘look I supported you, or liked some of the things you were saying, or i didn’t support you but think some of what you were saying was right’.”

He also defended his abolition of Labour’s old electoral college for selecting the leader in place of the new system of members, affiliate and registered supporters.