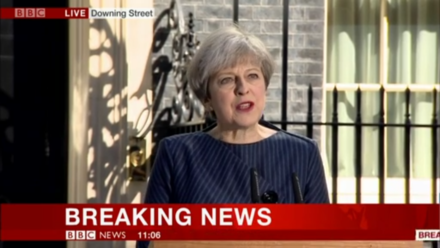 Theresa May today stunned the nation by calling a general election for June 8.

She made the biggest move of her political career by asking Britons for a mandate to deliver Brexit.

“It will be all about leadership… or weak and unstable coalition government led by Jeremy Corbyn and propped up the Liberal Democrats,” she said in Downing Street.

She will ask the House of Commons to vote to scrap down the fixed-term parliaments act, which requires a two-thirds majority, and go to the country in six weeks’ time.

May also set out some of her key dividing lines with Labour when she highlighted the party’s splits over Brexit.

“The country is coming together – but Westminster is not.

“In recent weeks Labour has threatened to vote against the deal we reach with the European Union.”