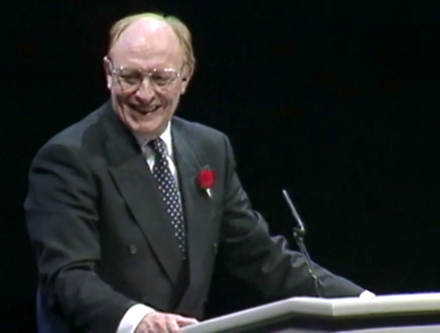 Former Labour leader Neil Kinnock has spoken of his regret about the Sheffield rally in 1992 when the party seen as triumphalist days before a surprise defeat.

The pre-election event, held 25 years ago and one week prior to a electoral win for John Major’s Tories, is widely remembered for Kinnock’s call and response with the jubilant crowd of “we’re alright” or “well alright”.

When the Tories pulled off victory despite Labour’s lead in the opinion polls the rally went down in history among voters and lent weight to the belief that surveys slightly overstate Labour’s vote share.

Kinnock said voters remember it because of “extensive commentary” and coverage it received.

Kinnock told BBC Wales’ Sunday supplement: “The first stories were written in the weeks following the election, and rather too much weight was given to it.”

“If I had my time again I would have taken a different approach.”

“But on the evening we managed to squeeze coverage of the rally into the last three minutes of the 9 O’Clock news, by John Cole [former BBC political editor], and John, without giving any extensive coverage, said: ‘This is the most stirring political occasion I have attended since the nomination of John F Kennedy in the early 1960s.'”

“In order to try to get everybody to calm down and quieten down, so we could get on with the rally and get it on the TV news, I shouted to the crowd in the manner of a rock and roll singer, I guess, ‘well alright’,” he said.

“They all chanted back ‘well alright’, so I said it again and they chanted back, so I said come on, we’ve got to get on with some talking here, and everything quietened down.”

Kinnock was also critical of the change of event choreography at the last minute, which added to this feeling, with the shadow cabinet walking through the 11,000 strong crowd.

“There was a sort of tangible political heat coming off it, I guess that looked triumphalist, and I cursed the person – I knew who he was – and I took him aside afterwards and gave him a few choice remarks for changing those arrangements,” he said.

“So instead of modest competence, which is what I wanted to portray, and most of the campaign did, we had this entry into the arena – we had everything but the Tredegar male voice choir singing.”