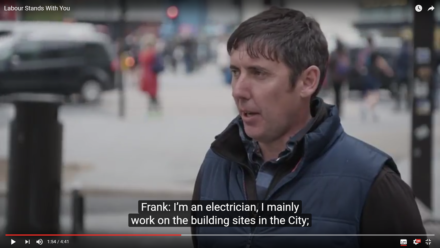 The short film was aired last night to highlight the problems facing people trapped in low pay and insecure work.

“Everybody, whatever their contract, will have equal rights at work – sick pay, holiday pay and a real living wage,” said McDonnell, the shadow chancellor.

“We will end zero hours contracts. No one will be forced into bogus self-employment. The minimum wage will be a real living wage of £10 a year. But the big news will be the national investment bank. This will bring sustainable industries and secure jobs to the areas that have been neglected for far too long.”

Loach, the Bafta-winning director of Cathy Come Home and I, Daniel Blake, has been an enthusiastic cheerleader for Jeremy Corbyn over the last two years.

“This is a film about insecure, low paid work, which is blighting the lives of millions of working class people,” said Loach.

“This has soared under the Conservatives, especially in the large parts of Britain which they have neglected and left behind, without jobs or investment. Labour’s programme will restore security to people’s lives, enabling everyone, regardless of their background, and all communities across our country, to thrive”.