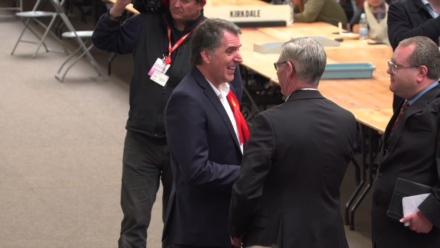 Steve Rotheram sparked a fresh selection battle tonight when he confirmed he would step down as an MP after winning the Liverpool metro mayor’s post.

Rotheram, 55, who won a landslide in the city region election last week, has now ended months of uncertainty by announcing he will leave his Liverpool Walton seat after seven years in the Commons.

Labour officials now face having to get someone in place by Thursday – the date by which parties have to complete the paperwork for nominating their candidates.

Rotheram also appeared to aim a barb at one of the rumoured trade union candidates to replace him when he said he had spoken to “numerous people” to convey the message that a “local candidate” should be chosen.

Dan Carden, an aide to Unite general secretary Len McCluskey, has been repeatedly linked to the seat but it is unclear whether he has support locally. Joe Anderson, city mayor, has declared an interest but could face competition from Carden, who was born in Liverpool.

Liverpool Walton is an ultra-safe Labour constituency but no candidate was selected in last month’s rush of selections because Rotheram had still to make his intentions clear.

He ultimately won a landslide win in Thursday’s election for metro mayor post with 59.5 per cent of the vote.

Tonight Rotheram issued a statement in which he said he need to “concentrate my full attention” on his new role.

He also issued a criticism of Labour’s “exceptional selections procedure”, under which officials from the ruling national executive and regional boards choose PPCs, when he said: “I believe that the failure of the Labour Party to allow local representation on the panels to select candidates is a significant misjudgement.”