The Tories posted total donations more than ten times the size of Labour in a single week in May.

Contributions from wealthy businessmen helped the Tories bring in £3.77m between May 17 and 23. Among them was hedge fund manager John Armitage and rock star Chris Rea, who gave £500,000 and £200,000 respectively.

Labour, by contrast, registered donations of £331,000, according to today’s update from the Electoral Commission, which covers donations above £7,500.

The biggest donor to Jeremy Corbyn’s party was Unite, Britain’s largest union, who gave just under £160,000. 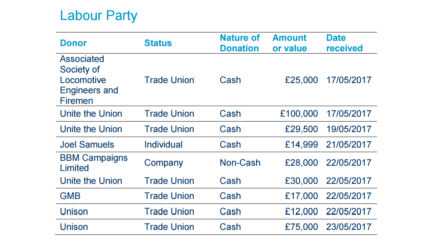