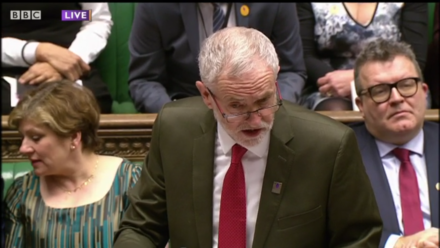 This is the full text of Jeremy Corbyn’s response to Theresa May’s statement on the Grenfell Tower disaster.

Can I start by expressing my disappointment to the Prime Minister at the lack of advance sight of her statement.

I met with the survivors of Grenfell Tower and those inspiring volunteers co-ordinating the relief effort for families who had lost so much. I hope the whole House will join with me in commending the community spirit and public support which helped so many traumatised families.

Our love, our condolences and our solidarity goes out to those families again today and in the difficult days and weeks ahead.

They were, as the Prime Minister said yesterday, let down: both in the immediate aftermath and so cruelly beforehand. And the public inquiry must establish the extent and by whom.

At least 79 people are dead. It is both a tragedy and an outrage because every single one of those deaths could have been avoided.

The Grenfell Tower residents themselves had raised concerns about the lack of fire safety in their block.

The Prime Minister said “It is right that the CEO of Kensington & Chelsea has now resigned”. It may be, but why aren’t the political leaders taking responsibility too?

From Hillsborough, to the child sex abuse scandal, to Grenfell Tower the pattern is consistent. Working class people’s voices are ignored, their concerns dismissed, by those in power.

Our brave firefighters must never have to deal with such a horrific incident again.

Those of us with over 30 years’ experience in this House would have struggled under the pressure generated by an incident of this scale. So as I said yesterday, my Honourable Friend for Kensington deserves praise for the tireless and diligent way she has stood up for her constituents.

They need answers and the public inquiry must address:

The apparent failure of the fire alarms at Grenfell Tower, which meant many residents reported they were only alerted to the fire by the screams of their neighbours.

Whether the advice given to tenants to stay in their homes was correct and what advice should be given to the people living in the 4,000 other tower blocks around our country.

Why sprinklers were not installed and whether they now should be retrofitted into all tower blocks.

Whether the cladding used was illegal, as the Chancellor has suggested, and whether it should be banned entirely and what wider changes must be made to building regulations and to fire prevention regulations, including the frequency and enforcement of fire safety checks.

Whether tenant management organisations are responsive enough to their tenants and what greater powers tenants need.

Whether survivors and people evacuated from adjacent properties were rehoused promptly and adequately and whether they will all be rehoused within the borough with no increase in their rent.

The resources available to the Fire & Rescue Service, and whether response times and capacity are adequate in all areas of the country, since the number of wards in which response time targets are not being met has increased tenfold since 2011.

Lessons must be learned in the public inquiry and a disaster that never should have happened must never happen again.

The Government must delay no longer and now implement the recommendations of the 2013 inquiry report following the Lakanal House fire.

Fire safety measures cannot be left to a postcode lottery so I ask the government make available emergency funds as my Honourable Friend for Leeds West also asked yesterday, so that councils can carry out fire safety checks and install sprinklers, and the timetable for that made known to residents.

Will the Prime Minister also ensure that counselling and mental health services are available to all the residents of Grenfell Tower and those who witnessed it unfold on the Lancaster West Estate, including the emergency services who responded.

Mr Speaker, the public inquiry must report as soon as possible and changes that can and should have been made already must now be made without delay.