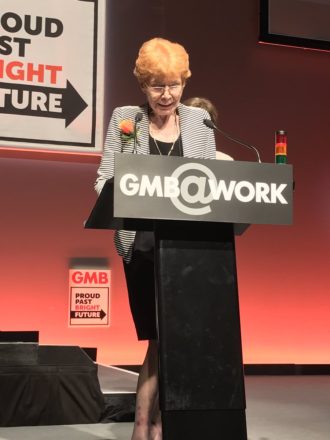 Jeremy Corbyn paid tribute to the former dinner lady who rose to be president of the GMB union and chair of the Labour party, who has just died.

Mary Turner, a union activist for more than 60 years, was described alternately as a “trailblazer”, a champion of low-paid workers and simply a “superstar”.

Turner was born in Tipperary and as a teenager joined the Tailor and Garment Workers’ Union — which later became part of the GMB — and went on to work at Jackson’s Tailors on Oxford Street, London. Later in her career she was a mother of chapel in the print industry.

During her time as a dinner lady she organised on behalf of workers who were “poorly paid, untrained and treated badly” and was also “instrumental” in ensuring the provision of free school meals was adopted as Labour Party policy.

Last night Corbyn and Tim Roache, head of the GMB, led the acclaim for the life of a woman who helped transform the labour movement.

“I’m sad to hear of the death of my friend Mary Turner. Mary was such a great campaigner for people,” Corbyn wrote on Twitter.

“We first worked together in the early 1980s defending school meals in Barnet and I last saw her at a Labour national executive meeting. She paved the way for so many women in the union movement and encouraged others to speak out.”

Roache described Turner as a “giant” and “loved by all”.

The GMB union wrote on Twitter: “We’ll miss you, Mary. A TU legend. Tough as nails & loved by all. Thoughts w/family, friends & her beloved region. Chair it well up there.”

Turner served on Labour’s national executive committee and chaired the party in 2004. She was awarded an MBE in 2010 and a CBE in 2017.