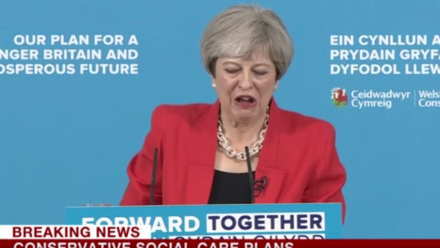 It was a display of double-speak that would not be out of place in a George Orwell novel. As Theresa May unveiled a u-turn on the public sector pay – but don’t call it a rise – one of her officials set out the prime minister’s thoughts.

Of course, it is the job of the Number 10 spokesman or woman to pass on the views of their boss – but yesterday’s update on the shift in pay policy was a breath-taking example of the dishonesty which mars the Tory administration.

Remember, this is a government which wanted to announce it was lifting the public sector pay cap by offering rises of up to two per cent to police and prison officers. Yet the Tories took this decision on the very day that inflation figures were published showing inflation had risen to 2.9 per cent in August, an increase on 2.6 the previous month. So, yes, this pay bonanza was in fact another pay cut.

Trade unions reacted with justified fury at the news. There are too many explosive reactions to choose from but, to take just one, TUC general secretary Frances O’Grady described the offer as “pathetic” and “derisory”.

It is worth looking at the full range of porky pies told by May’s spokesman when he unveiled the bad news yesterday. This four paragraph quote was published widely, including in The Independent.

A Downing Street spokesman said: “The Cabinet agreed that our public sector workers are among our most talented and hardworking people in our society. They like everyone else deserve to have fulfilling jobs that our fairly rewarded.”

I doubt they did agree that. The Tories have presided over seven years of real terms pay cuts and are thousands of pounds worse off. If May and Philip Hammond believe in a “fair reward” then why did the chancellor tell British people to “hold their nerve” over public sector pay restraint as recently as July?

Downing Street spokesman: “The government takes a balanced approach to public spending, dealing with our debts to keep our economy strong, while also making sure we invest in our public services.”

Wrong! It is not balanced at all to hold down public sector pay for seven years, then lift it for just two sectors in a hasty announcement yesterday. And, as for “dealing with our debts”, this was the same fib for which David Cameron was busted in 2013, when he used a similar form of words in a political broadcast. The national debt has reached £1.7 trillion under the Tories, up from around £1 trillion in 2009/10.

“The government will continue to ensure that the overall package for public sector workers recognises the vital contribution they make, and ensures that we can deliver world class public services, while also being affordable within the public finances and fair to tax-payers as a whole.”

Public services are no longer world class under the Tories. Public satisfaction with the NHS reached a record high under Labour before suffering a record fall under the Tories in 2011. It has since stabilised although dissatisfaction leapt by the largest level annually in 2015.

“The government recognises that in some parts of the public sector, particularly in areas of skills shortage, more flexibility may be required to deliver world class public services, including in return for public sector productivity.”

Oh dear. More flexibility? Does that mean a proper rise, a fake pay rise of the like announced yesterday or another pay freeze?

It is no wonder that Mark Serwotka, general secretary of the PCS union, yesterday described the Tories’ offer as a “pile of crap”.