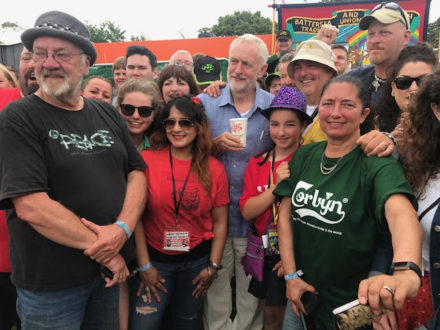 Millennials – usually graduates – living in big cities are both the most misunderstood and the most important demographic currently shaping British politics.

Scorned at by psephologists who consider the internationalist outlook of these latte-sippers to be the very thing that Brexiteers and Trump supporters were so angry about.

Misunderstood by politicians as a harmless generation of protest-goers who’d never pose much of a threat at the ballot box and to the Conservative Party.

Important because they were part of the Labour party’s surprising turnaround in 2017, and have triggered a debate with a focus on young people not seen for decades. The Conservative conference could not stop trying and failing to chuck a bone to the youth, only to literally have a coughing fit at the prospect of caring about them.

Still, much conversation still considers this class through the prism of old class politics  –  manual versus non-manual – pitting them against not just other generations but the traditional working class.

In some ways that diagnosis is understandable. I was born to a working class mixed ethnicity family from East London with parents in a manual and a low-skilled job, neither of which went to university, I attended Durham to study Politics, and often find myself now in rooms with MPs and journalists. It’d be quite easy for me to follow the Sadiq Khan line: “Working class girl and middle class woman”. But unlike Sadiq’s journey, me and my peers with similar journeys will build our social capital – but are very unlikely to procure capital itself; be it money, housing, or any other tangible wealth. The city offers fewer opportunities than it did then.

This is a group that is far from the most struggling – and young people that do not go to university are even less likely to gain social capital. If the Labour Party wins this demographic but loses out among its ‘traditional base’ and poorer voters, it still has soul-searching to do. This is less a question of who is worse off — rather that what motivates this new demographic is unfairly often attributed to being a ‘liberal metropolitan elite’. But it isn’t the social liberal, international and happy-in-diverse-large-crowds outlook that properly motivates them to vote to their Left, which is why Labour could get away with their muddled messaging on Brexit (for now)— it is a consciousness they do not have a stake in society as their parents did. The motivation is economic; and it is entirely legitimate. And psephologists and Conservatives are taking a risk if they do not view it as such.

This is a demographic that is in some ways the parallel to the home-owning socially mobile working classes who were loyal to Thatcher for Right to Buy with socially conservative views. Except they don’t have assets – in exchange, they have networks. That exchange is not considered a fair bargain. And now, they are bargaining and using their voting power to do so.

Historically, the ability to build networks has been a prerequisite to high pay and assets, home ownership, a stake in society. Not having social capital was associated with a lack of social mobility. It is still true that social capital is integral to getting good jobs. But it is increasingly the case that graduates who build these networks still find themselves trapped in an overcrowded labour market and shut out of the housing market. They may be exposed to a wide professional and social world. That can shape a liberal outlook. What is left is a social liberal with joyful evenings, but with zero assets. It is social capital without the capital. And that changes a person’s politics.

I’d noted before that this demographic is, in essence, a brand new class that should be treated as such by psephologists. The rise of a new class heralds a new ideological era. A new era shaped by an entire demographic with an ideology shaped precisely as a result of being devoid of capital. We often talk about the youth’s disdain for capitalism, but there is a serious question to ask in why this generation, without capital, should have faith in capitalism. And if so, whether the behaviours of this generation will be the very root of a new economic settlement. It is the inverse of Thatcher creating a generation of supporters via Right to Buy in that it is their children rebelling.

The questions of these voters are: what does it mean to have social capital while existing in a new reality where that doesn’t translate into capital? What do they do when that link is broken? And to what extent will these voters continue to hold loyal to Labour’s promises of a new, fairer settlement while that translation is broken? These are questions that should puzzle psephologists, be the focus of Labour strategists, and terrify the Conservatives.

This demographic will likely be the focal point of our politics for some time to come. It should be taken seriously. At the least, it deserves more explanation than telling them they can’t afford a house because of… avocado toast.

Jade Azim is co-editor of Open Labour and Labour activist in Walthamstow.