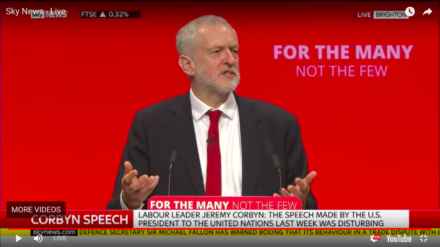 Labour is taking on anti-Semitism within the party, the founder of Momentum said today.

Jon Lansman, a veteran Bennite activist, said prejudice against Jews “has to be dealt with” following the end of Labour conference when a few incidents prompted anger and dismay. One delegate made what was widely regarded as an anti-Semitic comment from the floor in Brighton while Labour Party Marxists – which is not affiliated to the party – was accused of handing out prejudiced material.

Today Lansman, the founding chair of pro-Corbyn group Momentum, admitted there was anti-Semitism within Labour as well as wider Britain and spoke of his disgust at such behaviour.

“Anti-Semitism is a problem throughout society, it would be extremely surprising if it wasn’t also present in the Labour Party, alongside other forms of discrimination,” he told the BBC’s Andrew Marr Show.

“Which is why I’m so pleased that the national executive  [committee] of the Labour Party put out a statement which made very clear our opposition to all forms of discrimination, anti-Semitism, Islamophobia and so on.”

Lansman, a Jew and longstanding Labour member, has previously spoken out against Holocaust deniers.

Jeremy Corbyn has condemned anti-Semitism repeatedly but disappointed some when he declined to refer to the issue in his conference speech on Wendesday. Conference passed tougher rules on tackling anti-Semitism and other forms of discrimination earlier in the week.

“It is incredibly important to me as a Jew. I am very clearly against any form of anti-Semitism”, Lansman added.

“I think it is the case that you have to be a Jew to actually experience anti-Semitism.

“I have actually experienced anti-Semitism. I know there are problems with anti-Semitism and it has to be dealt with.”