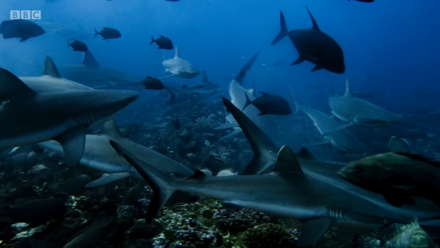 Sir David Attenborough is at it again – ingenious tusk fish, surfing dolphins and birds snatching giant trevally fish all mesmerising the public in the BBC’s outstanding Blue Planet 2, above.

These enchanting scenes are however underscored by an increasingly serious message – that the abundance, diversity and productivity of our oceans can no longer be taken for granted.

Public and political consciousness of the pressures facing our oceans is undoubtedly on the rise. Successive governments have taken a leading role in marine conservation, perhaps most notably across some of our 14 remarkable Overseas Territories (UKOTs). Spanning the Indian, Atlantic, Pacific and Southern Oceans, the territories give this country responsibility for some of the most globally significant, and in many cases pristine, marine biodiversity on the planet.

Seen in this light, the “Blue Belt” policy to increase marine protection within the territories has rightly drawn international attention, with the government already committing to increasing protection around Ascension and Tristan da Cunha in 2019 and 2020.

It should also be remembered that similar commitments to the current government’s Blue Belt policy featured across the 2010, 2015 and 2017 party general election manifestos. Indeed the Blue Belt policy was catalysed by the coalition’s commitment to designate the Pitcairn Islands as marine reserve, itself preceded by the British Indian Ocean Territory reserve established by David Miliband in 2009. In addition to committing to complete the network of marine protected areas in Britain’s domestic waters, Labour’s 2015 manifesto made strong pledges in the territories:

“The next Labour government will ensure that the UK becomes a global leader in marine protection. We will deliver a full marine protected area around Pitcairn, funded within existing budgets and backed by private sector investment, and based on new satellite technology and communications. We will also take forward proposals for additional protected areas from the UK Overseas Territories of Ascension, and South Georgia and South Sandwich”.

Labour, the Liberal Democrats and Conservatives have all had an active hand in, and signalled their willingness to continue, Britain’s deserved reputation for international leadership on the oceans. Colleagues such as David Miliband, Huw-Irranca Davies, Barry Gardiner, Ben Bradshaw, Hilary Benn and Margaret Beckett can be rightly be proud of Labour’s marine legacy while in government, passing the seminal 2009 marine and coastal access act, alongside championing strong international delegations to fora such as the International Whaling Commission.

I am therefore delighted to support the Blue Belt Charter which, led by the Great British Oceans coalition, is calling on MPs from all parties to reaffirm their support for strong leadership on ocean protection.

Commitments from governments across the globe have undoubtedly increased. However we remain far short of the international obligation to protect at least 10 per cent of our oceans by 2020. Immediate and serious measures are needed – our vast oceans are being filled with plastics; they are warming and acidifying as a result of climate change; and 90 per cent of the fish stocks on which billions rely for protein are now fully or over exploited.

The work will not stop with this government. Labour has never shirked responsibility in ensuring Britain plays a leading role in tackling globally shared threats – the nation is uniquely privileged through the overseas territories to make a telling contribution to addressing this global threat by safeguarding some of these outstanding environments.

Consider this – since 1969, 12 people have set foot on the moon, yet only three have been to the deepest corner of the ocean in the Marianas Trench. The ocean covers more than 70 per cent of our planet, yet more than 95 per cent of this remains completely unexplored. It is vital that we should sustain overwhelming cross-party support for Britain to remain a globally leading force for the oceans, whatever the government of the day.

I therefore encourage my colleagues to demonstrate their support for continued British leadership by signing the Blue Belt Charter. With some half a billion people expected to eventually view Blue Planet 2, it is clear that the public will hold us to task.

Angela Smith is MP for Penistone and Stocksbridge.

View all articles by Angela Smith