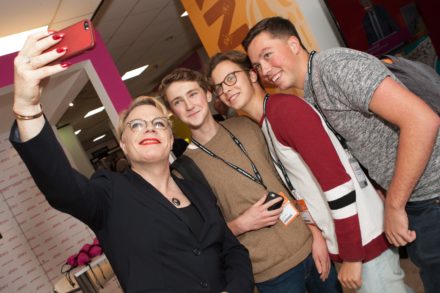 Campaigning up and down the country for the Labour Party and Jeremy Corbyn in the last general election, the energy and enthusiasm of young people was fantastic. Many young people responded positively to the manifesto of hope that we fought the election on with our party clearly in the lead amongst this age group.

Yet, whilst the young people I met on the campaign trail were engaged and enthusiastic, some of them were shut out of our political process because they are deemed too young to have a vote.

These 16- and 17-year-olds, who were also shut out of the decision-making process in the EU referendum in 2016, see politicians making decisions about their futures all the time, yet have no say in who represents them, and no political power to get the changes they want.

How David Cameron must rue the day he blocked votes at 16 for the EU referendum. Denying young people the chance to have their say on the biggest issues of the day was wrong then, and Theresa May and the Tories trying to stop young people gaining the vote is wrong now too.

I launched my campaign to be a member of Labour’s NEC by calling for an end to “politics as usual” as part of a platform focused on making the party more welcoming to groups who often feel isolated or excluded from taking part in the political process.

As someone who has always tried to give a voice to the voiceless, campaigning on issues that have sometimes been unpopular, I know that extending the franchise and giving young people who are 16 and 17 the right to vote is the correct thing to do.

I started my career performing on the streets of London’s Covent Garden. I never gave up when times were hard. Now I perform all around the world. I want all young people to be given the opportunity to follow their dreams.

Every argument used by those who try to maintain the status quo is bogus. It’s no wonder the Conservatives want to keep things the way they are, it’s all in the name. In contrast, Labour is strongly backing Jim McMahon’s private members bill to change our country for the better and widen and deepen our democracy.

But this isn’t just about party politics, it’s about something much bigger too.

I believe we’ll only make this world work for all seven billion of us on earth if we give every single person a fair chance. And having a fair chance, means having an equal say. MPs can make a big step towards that on Friday when the Votes at 16 Bill comes before parliament.

When I tour the country for Labour, my first and last message to party members and all people is always to vote. People fought and died for the vote here in the past, and people around the world are dying right now for this important entitlement.

I’m backing the Votes at 16 Bill. Let’s hope enough MPs are brave enough to strengthen our democracy and give our young people more say in the decisions that effect them every day

Eddie Izzard is a candidate in the election for Labour’s national executive committee.