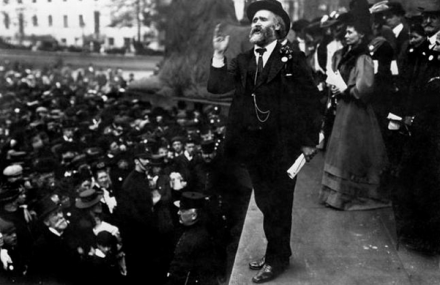 At this moment in our nation’s history, and as we are reconsidering our place in the world, the Labour Party has had to reassess its purpose and direction.

Questions about international solidarity and national sovereignty, immigration and citizens’ rights, pacifism and defence have been recurring challenges to the British Labour movement, and continue to stimulate debate today. Since the defeat at the election of 2015, subsequent leadership contests, and consequences of the EU referendum, the very essence of the party has been wrestled with by members and external commentators. But the “flash election” this year – called on the belief that it would capitalise on what were regarded as Labour’s divisions –  turned out to galvanise support around an alternative vision of our society offered by the Labour manifesto.

Now many within and beyond its membership are recognising that the British Labour Party is, and always has been, a big-hearted movement which embraces a broad family of socialists and social democrats, drawn from different backgrounds and cultures, from all faiths and none.

Before the Labour Representative Committee (the predecessor to the Labour Party) was formed in 1900 under the leadership of James Keir Hardie (above), the labour movement in Britain was composed of a wide variety of causes, groups and organisations, many of which gathered together to found the Independent Labour Party in 1893.

One of those founding organisations was the Labour Church, a nationwide association proclaiming that the labour movement was in essence a religious campaign for social justice and freedom. My book The Labour Church, the movement and its message was published recently and is the result of a decade of research, when I explored the life and significance of a radical Social Gospel movement.

Historians of the labour movement have pigeonholed the Labour Church by categorising it as “ethical socialist” along with the Independent Labour Party and the numerous cultural activities associated with the Clarion movement, such as choirs, cycling clubs and children’s clubs.

The book concludes by highlighting a continuing theological imperative for the British and international Labour movements, and asserts that Labour history can be interpreted as religious history.

To claim that Labour history can be read as religious history needs unpacking, because how religion shaped Labour politics in Britain and across the world during the past two centuries has been contested by both secular and religious socialists alike. The role of religion in politics is determined by the ways in which faith is understood through its relationship to social identity, consciousness and action: from those who warn against religious belief as an oppressive psychological force or dismiss theological convictions as a primitive worldview; to people of faith who either remain within the religious communities that fashion their political perspective; or others who look beyond conventional creeds and structures to find alternative theologically political understandings.

For those people who hold to a theological imperative for British and international Labour politics, it offers a broad set of reference points from which they have sought religious inspiration and an ethical framework with which to formulate policies and write manifestos.

Understandings drawn from scriptures, traditions, theological works and the perpetual reflections of faith communities have been applied through socialism from the conviction that religious belief should have a practical and political impact. In a Fabian Society paper entitled Fairness not Favours: How to reconnect with British Muslims from 2008, London mayor Sadiq Khan wrote about how his faith led him into Labour politics, and he argues for the recognition of faith identify in the formation of Labour Party vision and policies.

As our society contemplates the future, fundamental questions are recalled, leading to a re-evaluation of the vision for the world we wish to share. The alternative worldview presented by the Labour Party throughout its history, and now with the leadership of Jeremy Corbyn, has made many people pause and reflect, most recently on the narrative of austerity, anti-immigration, and “Brexit means Brexit”.

The election manifesto’s call to “build a Britain that works for the many, not the few” resonated with people in 2017 and is echoed by the plea of the forebears of Britain’s Labour movement, including the Labour Church that embraced socialism as a sacred cause. Theological socialism was both the rationale of the Labour Church and the continuous appeal for people of faith and goodwill to realise a new world.

Neil Johnson is the author of The Labour Church, the movement and its message (London and New York: Routledge, 2018)

View all articles by Neil Johnson