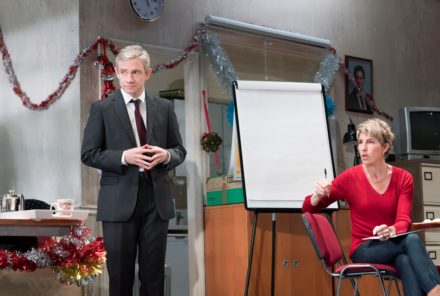 “I got involved in politics to find the vaccine not put plasters on problems” says the fictional New Labour MP who is the central character in James Graham’s latest play.

Labour of Love stars Martin Freeman and Tamsin Greig and starts with the 2017 election. Unlike almost any wing of the Labour party itself, Graham is able to encapsulate what an achievement it was for Labour – under Jeremy Corbyn – to get 40 per cent of the vote while asking fundamental questions about whether the same factor played a role in the worst Tory prime minister ever receiving 43 per cent.

Leaving in the balance throughout the result in the fictional seat – what we presume is Ashfield, the playwright’s home seat – Graham acknowledges the Corbyn surge and slide in the working class vote. It might be the most significant airing of the fact that Labour gained 35 seats but lost Mansfield, and four others like it. Greig’s character Jean Whittaker informs the audience that Sir Alan Meale’s former coal mining seat has never not been Labour … until 2017. A truth in both the real world and Graham’s fiction.

The play traces back – and then forward – the career of a modernising MP who returned home to fight a fictional by-election in 1990. Despite winning the endorsement of Labour’s national executive committee, and the local members, there is a lingering sense that he was “imposed”. This is something the party’s left plays on when the going getting tough.

Freeman’s character is burdened with two exhausting factors in his career: government and the constant fear of being deselected. The former reflects how trying to deliver Labour’s ambitious promises is relentless when you always have the Tories, the press, interest groups and the civil service breathing down your neck. How the character draws confidence and resolve from his casework and community events shows his grounding. Whittaker is a constant reminder of their political realities. Knowing Graham and the cast met a lot of Labour MPs in the process of developing the play they will have heard first hand how this works and the drive Labour MPs get from their constituents, tackling their problems and working up real solutions with campaign groups and activists. It is also a useful reminder that even the most New Labour of ministers were more left-wing that the government itself.

The second concern – the constant threat of deselection – is heightened in opposition. That it can be debilitating is interesting to watch. Those who are currently pushing for MPs to come under this kind of pressure right now should watch this and know: time is finite, MPs are busy and they can either spend their time scuttling round organising for branch AGMs or they can be reading about and planning for how to change our rigged system. Few can do both – so make your choice. In our ranks, MPs are the frontline of our movement not the bosses’ class. With our support they can do more of what we believe.

Graham’s creation is a timely reminder that as fellow party members we could all be a little more helpful to our MPs – or, at the moment, councillors – when they are up against the real enemy – the Tories – and trying to transform the country.

What is nice for someone who has been a party member for approaching two decades is how familiar the world of Labour of Love all feels. The MP’s agent and office manager is known to all of us. Whittaker is the woman who does the work, takes none of the credit and has the best gossip while you make tea or stand outside for a cheeky fag. The council leader character (in Labour he is actually rarely the council leader but a councillor nevertheless) and his brand of “real Labour” – that somehow stressing your northern accent makes you more working class and therefore authentic – is ever-present in constituency Labour parties. The new member lumbered with branch officer roles at her first meeting was all of us once.

Finally, Graham’s argument is what Freeman described to Andrew Marr this weekend as “a passionate case for the centre”. The Hollywood actor – and star of a Labour party political broadcast – says that “the centre is usually seen as a cop-out, a compromise, a weak cup of tea – not anyone’s real flavour, or [even] careerists”. However, he continues, “Graham’s words, that I am lucky enough to speak at the beginning of act two, put a philosophy for the centre – not why the centre is the best of a bad bunch – but why it can work and serve the country and the community best. Someone needs to write that speech for real, for [Labour party] conference”. While we wait for this conference speech, it is worth getting ticket for Labour of Love.

Richard Angell is director of Progress. Labour of Love is at the Noel Coward theatre in the West End until December 2.