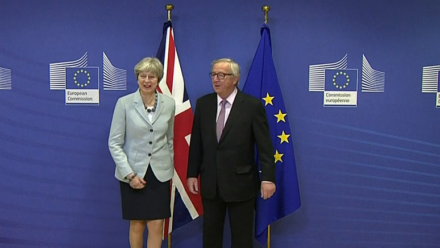 Figures from across the labour movement have given their take on Theresa May’s deal with EU leaders, which was announced this morning.

Richard Corbett, Labour’s leader in the European parliament: While it is good that progress has been made, it can hardly be described as a success that nine months on from the triggering of article 50, we are only now in a position for the real negotiations to begin. And even this deal leaves many details and questions unresolved, for example on how citizens’ rights are to be enforced and exactly how a customs border with Ireland can be avoided.

“It also raises an interesting question: if the UK is to ‘maintain full alignment with those rules of the internal market and the customs union which… support north-south cooperation, the all-island economy and the protection of the 1998 agreement’, then does that not mean most single market rules, including those for agriculture, sanitary standards, consumer protection, transport, fair competition and much else?

“Is it a first step to remaining aligned with all of them, to keep the benefits of the single market? Are the government’s ultra-Brexiters really on board for that?”

“The lengthy process of getting here, the questions it leaves unresolved, the chaos and confusion of this Tory/DUP government, raises questions about the prime minister’s ability and competence as we move on to the more difficult talks around the future relationship between Britain and the EU.

Sadiq Khan, mayor of London: The prime minister has done what is necessary to get the talks on to the next stage – but we should have got to this point many months ago.

The government need to now accelerate progress – we simply cannot afford further delays. It is clear from the many conversations I have with business leaders that they need to know the details of the interim deal as early as possible in order to avoid having to put contingency plans into place.

However, it is extremely disappointing that the prime minister is still insisting that Britain will leave the single market and customs union. Staying in both is without a doubt the best long-term solution for London and Britain.

Despite the progress today, it looks increasingly unlikely that we will get a deal that works in London’s best interests and protects jobs and growth across Britain.

Keir Starmer, shadow Brexit secretary: Despite being two months later than originally planned, it is encouraging that the European Commission has recommended sufficient progress in the Brexit negotiations.

The priority for both sides now must be to agree transitional arrangements on the same basic terms as we have now. That means staying in the single market and a customs union for a time-limited period. We will also need to know the political price of the deal struck and the impact any compromise that has been agreed will have on our future relationship with the EU.

As the talks now move on to a discussion about Britain’s future relationship with the European Union, Theresa May must seriously reflect on her approach to the negotiations so far. We cannot have another year of chaos and confusion or the farcical scenes we saw earlier on in the week that put jobs and the economy at risk.

Frances O’Grady, general secretary of the TUC: This moves the UK on to talking about the big issues of Brexit – how we get a good deal that protects workers’ rights, jobs and livelihoods.

But it’s clear the government’s determination to leave the single market and customs unions is getting in the way. The government must drop its self-defeating red lines and put these options back on the table.

And before the next round of talks, we need a sea-change in the way government acts. Ministers need to bring in the negotiating expertise of unions and employers.

Chuka Umunna, Streatham MP and leading supporter of Open Britain: It is about time. Eighteen months have passed since the referendum, so it is welcome that the government can finally start talking about our future relationship with our largest trading partner.

A huge amount of time has been lost thanks to divisions in cabinet, and the prime minister’s ridiculous red lines. In the meantime, new facts have come to light, on everything from Northern Ireland to the impact of Brexit for our NHS.

It has cost us a £50bn divorce bill to get this far. This is on top of a huge hit of tens of billions of pounds in lower growth since the referendum, and higher prices in the shops because of the plunge in the value of the pound.

When it comes to trade talks, the only model on offer is a Canada-style agreement which the prime minister and the chancellor have said would be bad for our economy.

Faced with these new facts people will understandably want to keep an open mind as to whether the costs of Brexit are worth it.