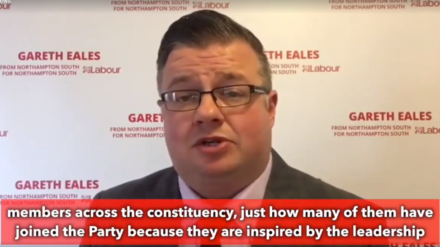 A postman and staunch backer of Jeremy Corbyn with a string of trade union nominations has won the selection for a target seat with a majority of just 1,000.

Eales was raised in the town and serves on Northampton borough and Northamptonshire county council.

He described himself as a consistent backer of Corbyn, writing on Facebook: “It is evident from speaking to Labour Party members, just how many of them joined because they were inspired by the leadership and political direction of Jeremy Corbyn. It is also clear that loyalty & consistency are very important to members too.

“With that in mind, I would like to place on record my consistent and genuine support for Jeremy, particularly at both Labour Leadership elections…I am not reinventing myself, what you see is what you get with me.”

He had appeared favourite for the selection after winning backing from 10 unions including the TSSA, Aslef, Usdaw and the CWU.

Last month Sally Keeble, a former Labour transport minister, saw off the challenge of the Labour left to stand again in her former seat of Northampton North.