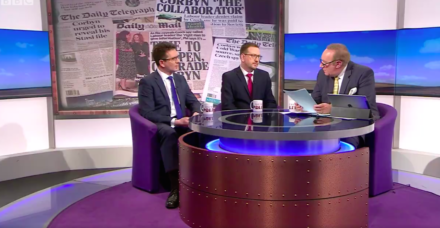 Following the Sun‘s “Commie Corbyn” story, which claimed the Labour leader met with a communist spy in the 1980s and suggested he briefed them on British politics and matters of state security, defence secretary Gavin Williamson said Corbyn “cannot be trusted” and accused him of “betrayal of this country”.

Neil repeatedly asked Steve Baker, “do you think he has betrayed his country?”. Steve Baker repeatedly refused to answer the question.

“Your security minister has compared Mr Corbyn to Kim Philby. Kim Philby was a traitor – at the time if he’d been found guilty he would have been hanged! That’s an outrageous smear to say of the leader of the opposition,” said Neil.

He concluded: “The real scandal, Mr Baker, isn’t what Mr Corbyn has supposedly done or not done. It’s the outright lies and disinformation that your fellow Tories are spreading.”

“Has he betrayed his country?” asks @afneil after claim from defence secretary about the Labour leader

“Jeremy Corbyn, I think, is a grave danger to this country because of the ideas in which he believes and what that would mean…” @SteveBakerHW