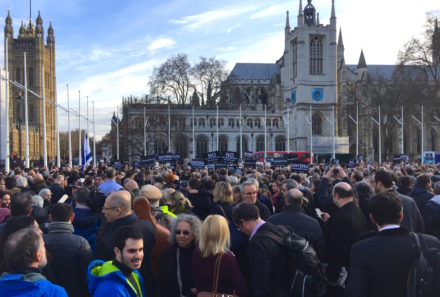 Last night – with just 24 hours notice – a vibrant cross-section of this country’s Jewish community stood together in Parliament Square to call for an end to antisemitism in our party.

Whilst the reasons for which community organisations had gathered was sadly understandable, most remarkable was that the support from our comrades – so keenly needed and asked for by Jewish Labour members and the Jewish Labour Movement – was given in spades.

It was truly heartening to see many Labour MPs, representing constituencies across the country and all shades of Labour opinion, come to stand in solidarity with Jews, and particularly their Jewish comrades in the party and the wider movement.

I saw friends from local parties across London; council leaders and union activists. A bit like an open-air conference. And we all said the same thing to each other – it’s great to be here, but why should we need to be?

On a personal level, what I have found most depressing about antisemitism in Labour is the ready assumption that Jews would so readily sell short millennia of persecution for an easy political hit. Our history is not a bargaining chip. It is a threat we have faced from generation to generation in some form or other. In the last century, most calamitously.

What’s more, it’s certainly not something that any other minority group would be expected to tolerate. Not believing the victim in line with the Macpherson principle, but second-guessing their motivation.

The past two years have seen hard-working people, dedicated to Labour values and winning power to help those who need it the most, being trolled, heckled, marginalised, deselected, for challenging the hateful charge that our motives are so base, we can’t possibly be victims.

I’m just so sick and tired of it. All those MPs, councillors and activists who joined us last night are sick of it too. And that – to judge by social media – is just the tip of the iceberg.

I’m sick of having to put up with being told that complaining about antisemitism is just another way of undermining the leadership.

I’m sick of having to point out that my job isn’t to be a spokesperson for the Israeli government or to defend a PM I wouldn’t have voted for. That I don’t support the occupation but that I do believe in the same right of self-determination for Jews that all minority communities should enjoy.

I’m sick of having to explain that I feel my Jewish values are Labour values and I shouldn’t have to compromise either. Nor that many parts and people in the party support me, support JLM, understand the hurt caused to Jews and want it end. I know the friends I campaign with in Barnet (the most Jewish borough in the country) are especially sensitive to this.

Last night’s turnout – and the rousing reception given to the Labour MPs who spoke – will hopefully have make it clear to the wider Jewish community that something has to change.

Yet again, I have been flabbergasted by senior Labour figures over the past few days who have no reason to have ever experienced antisemitism but opine that in their long decades of membership they’ve never seen such a thing.

If you wouldn’t dismiss a woman’s claims of misogyny or an LGBT person’s account of homophobia, don’t you dare dismiss antisemitism out of hand. The fact some people think this OK to do may help you understand why it’s called the oldest hatred of all. Perhaps we could start by acknowledging that.

For me, this is not about undermining the fact that Jeremy Corbyn is Labour’s leader. His mandate is clear. But with great power comes great responsibility.

No, this is a challenge to him to lead the Labour party – and the wider movement – out of this toxic situation and make all parts of Labour safe for Jews.

We had further words of contrition and apology from our Leader yesterday, which are of course welcome and demonstrate understanding of what causes our pain, and why Labour isn’t always a safe place for Jews at the moment. But these words need to be accompanied by actions.

Our party is better than this. So many follow him – now he must lead.

Mike Katz is vice-chair of Jewish Labour Movement and was Labour’s candidate in Hendon in 2017.