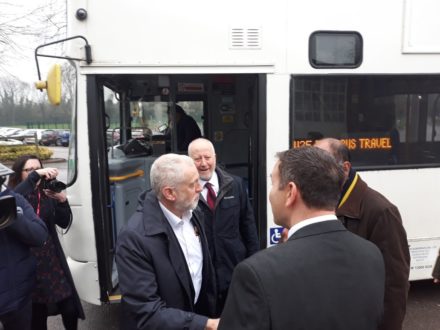 Today Jeremy Corbyn will visit a sixth form in Derby with shadow transport secretary Andy McDonald to launch a new policy: free bus travel for under 25s. “Young people deserve a break,” the Labour leader will say. “Nearly eight years of Tory austerity have hit their incomes, their chance to buy a house and their career opportunities.”

Why under 25s? Labour says our use of buses has dropped since 2010. We’re also more likely to be in low-paid insecure work, and we spend a high proportion of our income on travel. (A quick look at my banking app tells me travel is my third biggest expense.) The policy, to be paid for using ring-fenced car tax revenue, has environmental benefits too as buses ease road congestion and reduce air pollution.

But there’s a catch, if you can call it that. The funds would go only to local authorities that choose to introduce bus franchising or take their local bus services into public ownership. So this new policy, announced in the run-up to polling day on May 3rd, requires councils to embrace national Labour plans on a local level. It’s a smart way of encouraging Tory councils to bring in franchising and municipalisation.

The case for this approach is strong. The public currently pays for 42 per cent of bus costs: private companies run the most profitable services and local councils are left to “plug the gaps”. Run for passengers not profit, Labour says municipally-owned bus companies can save us £276m a year.

Fun fact: new member of the shadow transport team Matt Rodda (who unexpectedly took Reading East for Labour in June) was until recently a Reading councillor. As I’m sure you already know, Reading Council runs one of the UK’s ten municipal bus companies. The local authority’s pioneering public service is widely seen as highly successful, with 204 brightly-coloured buses, most of which are environmentally friendly.

Bus fare rises in England are outstripping inflation and the number of journeys has been falling. It’s important to note that the practical solution being put forward by Labour today is partly impossible: it is currently illegal to create new municipal companies. Metro mayors now have the power to implement franchising, but we’ll need a Labour government to truly “take back control” of buses.