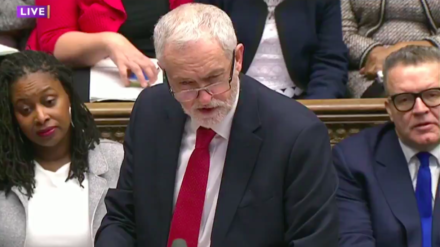 Jeremy Corbyn suffered a large rebellion last night as 89 Labour MPs went against his instructions on a Brexit vote.

The motion that sparked the rebellion would have seen the UK seek full membership of the European Economic Area after Brexit.

Labour MPs had been whipped to abstain on the EEA vote, but 74 defied the party whip to vote for the EEA amendment to the EU Withdrawal Bill and 15 rebelled to vote against.

The Lords amendment backing full EEA membership was rejected by 327 votes to 126 – a clear majority of 201.

Laura Smith, who represents the Leave-voting seat of Crewe and Nantwich with a majority of just 48, resigned from her role as a Cabinet Office shadow minister to vote against the EEA.

Jeremy Corbyn said: “The Labour Party respects the outcome of the EU referendum and does not support the EEA or Norway model as it is not the right option for Britain.”

“It would leave us with next to no say over rules we have to follow, it does not allow us to negotiate a new comprehensive UK-EU customs union and it fails to resolve the Irish border issue.”

LabourList understands that the MPs were instructed by the Labour leader’s office to resign.

Labour MPs who voted for the EEA:

John Woodcock (Independent – Barrow and Furness), currently suspended by the party, also voted in favour of the EEA.

Labour MPs who voted with the government against the EEA:

Kelvin Hopkins (Luton North) who is currently suspended by the party also voted against the EEA.