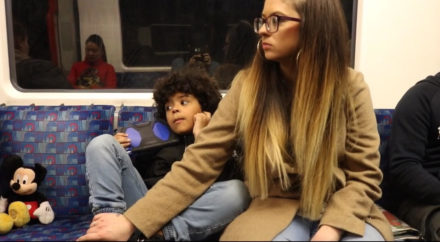 Autism is a word many hear of but not so many understand. My son Bowie, named after the legendary David Bowie, was two years old when my mother approached me with concerns. He was completely nonverbal, barely ever slept and his diet was minimal. He struggled with busy situations, had extreme social anxiety and his eye contact was non-existent. Within 11 months Bowie was diagnosed with Autism Spectrum Disorder. I was told by professionals to prepare myself for the fact that he may never speak, and this was the part of the diagnosis that hit me the hardest.

I automatically signed up as a member of The National Autistic Society. Every day I faced prejudice from passers-by whether that be on the bus, in a shopping mall or walking down the street. Bowie’s meltdowns have always been violent, and because of this I have received comments such as “your son just needs a good slap” or “you’re not disciplining your child enough”. I was fed up with the stigma that came with this disability that wasn’t visible to the eye. Every day, at some point I was in floods of tears.

My son never slept. I’d be lucky if I had two hours sleep a night. He suffered from night terrors and simply didn’t know how to switch off. I raised Bowie as a single mum, so caring for a child 24 hours a day without having respite when he was sleeping was extremely difficult.

In October 2015, nearly a year after Bowie was diagnosed, the unthinkable happened. Bowie was accepted into a special needs school in September of this year and I was invited to his Harvest Festival Assembly. I entered the hall and sat down waiting for my boy to enter and take his place on the stage. When he took his seat I could see him looking around wondering if his mummy was one of the faces in the crowd, he found me. Out of no where he pointed (something he had never done before) and said “MUM”. I stood up and looked around me to make sure other people had heard what I had heard and everyone was so happy for me, clapping their hands and looking tearful as they congratulated Bowie’s achievement. I couldn’t believe my ears and eyes, my boy had said the one thing I’d wanted to hear him say for so many months, “MUM”.

We now have what’s called ‘functional language’. Bowie can only construct small sentences, but can let me know if he’s hungry or wants to go to the toilet. He loves school, and his hobbies include gaming, music and swimming. He is affectionate and loves to have cuddles with me, and tells me he loves me every night before he sleeps. It’s not all smooth sailing: Bowie still doesn’t sleep through the night, his social anxiety is extreme and we now use a wheelchair when we have days out, he is still violent during meltdowns and he struggles with loud environments. But he has made progress in leaps and bounds. He is a charming, cheeky little man with a wonderful personality and I am very lucky to have him in my life.

In 2016, as Youth Officer of my local Labour Party, I attended the London Labour conference. One of the debates scheduled was about the NHS. I sat in the audience and listened to people speak about statistics, facts and figures, and although this was insightful I didn’t feel the message was coming across. I decided to raise my hand to ask to speak and I was lucky enough to be chosen. I took to the stage in front of hundreds of people and shared my son’s autism story. I spoke of the therapies my son has received from the NHS and the wonderful paediatricians and nurses who have taken care of him. I bought the message home of how my son would regress if the NHS lost funding, as I simply wouldn’t be able to afford medical care. I received a standing ovation.

The NHS is a wonderful thing, and without it my son wouldn’t be where he is now. This week I celebrate it, and give thanks to the wonderful medical professionals who are part of his care team. There is no cure for autism, but with the right support and help children and adults with autism can grow to be the people they were always meant to be.