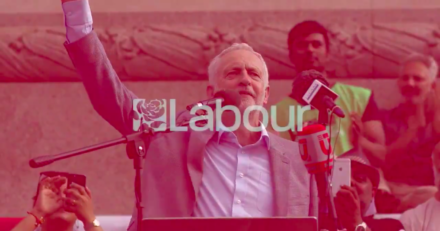 On Friday Jeremy Corbyn joined hundreds of thousands of people in London for protests during President Trump’s visit to the UK.

Addressing crowds in Trafalgar Square, the Labour leader celebrated the freedom to demonstrate and “our right to free speech”, while speaking out against xenophobia, racism and misogyny.

He also praised Sadiq Khan for “uniting London in all its diversity” after Trump criticised the Labour mayor of London in an exclusive interview with The Sun. The US President said Khan had done a “terrible job” tackling terrorism and crime in London.

Our message today to President Donald Trump was: We’re united in our hope for a world of justice not division.#TrumpProtest #TrumpVisitsUK pic.twitter.com/aJRQtO2vwP

Here are the highlights from Jeremy Corbyn’s speech at the Trump rally.

“It’s not about interfering in the affairs of another country. But when somebody on a global stage condemns Muslims because they’re Muslim, it’s not acceptable and we will call it out.”

“The elected Mayor of London, who is doing his job in uniting London in all its diversity, deserves praise and support, not condemnation.”

“Our environment is under threat. Lots of campaigners over many decades eventually brought many people together. And that culminated in the Paris Climate Change Accord, and I was there when it was made. There is no hiding place from foul air, from dirty seas, from polluted rivers. There’s no hiding place from the destruction of our natural world for any of us – unless we work together to protect it and protect the environment and that sustainability. So I don’t think anyone should be walking away from the Paris Climate Change Accord.”

“When a government condemns children because they’re Mexican, Guatemalan or from somewhere else – and so ill treats them on the border, that is a breach of every international convention on rights of the child.”