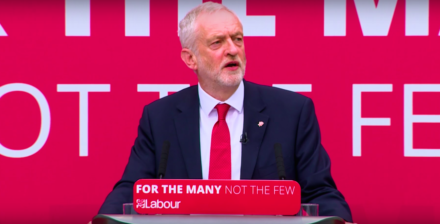 Jeremy Corbyn and John McDonnell hit back at Benjamin Netanyahu last night after the Israeli Prime Minister criticised the Labour leader over the wreath-laying row.

Netanyahu stated as fact that Corbyn had laid a wreath in tribute to one of the Munich massacre terrorists and that he had compared to Israel to the Nazis. But the Labour leader replied that the claims were “false” and attacked the Israeli leader’s record.

“What deserves unequivocal condemnation is the killing of over 160 Palestinian protesters in Gaza by Israeli forces since March, including dozens of children,” Corbyn tweeted.

Corbyn added that Israel’s nation state law, adopted by Knesset last month, was discriminatory. The new ‘Basic Law’ states that Israel is the national home of Jewish people and that only Jewish people have self-determination rights in the state of Israel.

The laying of a wreath by Jeremy Corbyn on the graves of the terrorist who perpetrated the Munich massacre and his comparison of Israel to the Nazis deserves unequivocal condemnation from everyone – left, right and everything in between

Israeli PM @Netanyahu‘s claims about my actions and words are false.

What deserves unequivocal condemnation is the killing of over 160 Palestinian protesters in Gaza by Israeli forces since March, including dozens of children.https://t.co/H5nXqi3pnU

I stand with the tens of thousands of Arab and Jewish citizens of Israel demonstrating for equal rights at the weekend in Tel Aviv.

Soon after midnight, John McDonnell tweeted in defence of the Labour leader and described Netanyahu’s intervention as “a line in the sand”. The Shadow Chancellor used the phrase “enough is enough”, which has been employed by Jewish groups to express dissatisfaction with Corbyn’s leadership amid ongoing antisemitism scandals over the last few months.

Jeremy Corbyn has devoted his life to promoting justice & peace &,yes,at times that means meeting people who haven’t shared those ideals because only dialogue can lead to peace.Having a politician like Netanyahu join the media feeding frenzy is a line in the sand.Enough is enough

The Twitter row comes as Corbyn has been under fire over claims he laid a wreath for terrorists linked to the Munich massacre of the 1972 Summer Olympics, in which 11 Israeli athletes were killed.

Appearing on Sky News yesterday afternoon, Corbyn said he was “present” but not “involved”. The Labour leader added: “I was there because I wanted to see a fitting memorial to everyone who has died in every terrorist incident everywhere because we have to end it.”

Luciana Berger, a Jewish Labour MP who has been a vocal critic of Corbyn during the antisemitism rows, commented: “Being ‘present’ is the same as being involved. When I attend a memorial, my presence alone, whether I lay a wreath or not, demonstrates my association and support.

“There can also never be a ‘fitting memorial’ for terrorists. Where is the apology?”

On Sunday, a Labour spokesperson said: “The Munich widows are being misled. Jeremy did not honour those responsible for the Munich killings.

“He and other Parliamentarians went to the Palestinian cemetery in Tunisia to remember the victims of the 1985 Israeli bombing of the PLO headquarters, many of whom were civilians.”