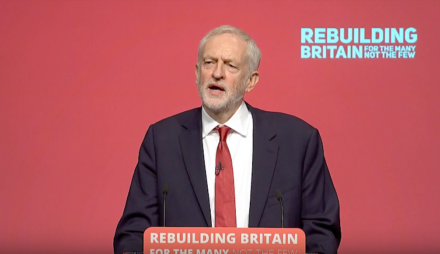 Jeremy Corbyn’s speech on Wednesday centred around a new theme for the Labour party: building a real democracy. The Palace of Westminster crumbling in more ways than one – as Corbyn said, “the old way of running things isn’t working anymore”. But what does his address mean for those trying to fix it? Here are four reflections on his keynote conference speech.

The speech saw Corbyn bring together plans to ‘democratise the economy’, including for workers to sit on company boards. If we want true and lasting economic equality, we must reform politics first. To secure the kind of economy we need, it’s going to require greater political equality: only once everybody has an equal voice in parliament will the decisions made there truly represent workers interests.

Currently, millions of people trapped in so-called ‘safe’ seats are effectively ignored, or forced to ‘hold their nose’ and opt for a second or third choice party just to keep out someone else. None of these people are being truly represented in British politics as things stand. Governments elected through proportional representation tend to create better economic, social and democratic outcomes because workers have to be listened to – wherever they are.

Addressing the dividing lines which have threatened to rip apart the Labour Party in recent months, Corbyn called for unity, saying: “Real unity is based on the freedom to disagree and debate and then come together around democratic decisions…

“We need to foster a much greater culture of tolerance. An end to abuse, online and in person. We must learn to listen a bit more, and shout a lot less.”

Much of what he proposes to unify the Labour Party could in fact unify the country were it to be applied by our MPs. The antagonistic nature of party politics in Westminster is deeply off-putting, and partly-driven by a winner-takes-all, majoritarian voting system.

“People in this country know that the old way of running things isn’t working any more. And unless we offer radical solutions, others will fill the gap with the politics of blame and division.”

There is a broader point here about British politics. Takes the House of Lords and its unelected members. Nobody drawing up a democratic system for the 21st century would include an institution in which some members are there on the basis of the family into which they were born. It is horribly outdated, totally lacking in transparency and hugely undemocratic.

People must be empowered to act. Despite devolution, power is still delivered from the top down. A shift in power away from Westminster and towards local communities is vital to truly give ‘power to the many’.

As Corbyn’s speech reached its final crescendo, he told the audience: “We must take our message to every town, city and village. United and ready to win, ready to govern as we were in 1945, 1964 and 1997.”

Yet because of the voting system, popular support alone is not enough to guarantee being able to form a government. In each constituency it is ‘winner-takes-all’ meaning that complete dominance in one area of the country counts for very little, and anyway, the gerrymandering of boundaries can turn a relatively safe seat into a super marginal overnight.

Support must be spread across the country to achieve true political legitimacy for a government, but with first-past-the-post, the same number of votes can secure a seat in one area and lose in another. Ultimately this means that even a party winning the most votes across the UK is not enough to guarantee the most MPs elected to parliament.

In both 1951 and February 1974, the party that attracted the most votes did not get the most seats. Electoral Calculus, which regularly projects the results of future elections in the UK, believes the same could happen again, with Labour losing out.

At the next election, Labour is likely to need a 7.4% lead to win a majority, compared to 3.4% for the Conservatives, due to the bias in the system. Jeremy Corbyn mentioned the struggles of the Chartists to win many of the democratic rights we appreciate today, including universal suffrage. Now, 200 years on, it’s time to build on that legacy with a new Charter for Democratic Reform.

Nancy Platts is Jeremy Corbyn’s former trade union adviser and co-ordinator of Politics for the Many, the union campaign for political reform.