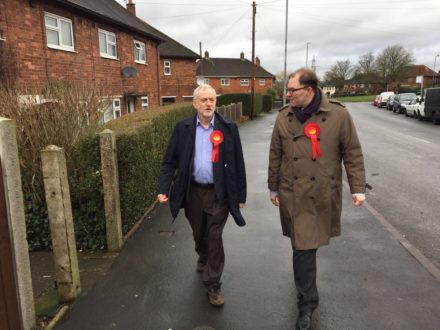 ‘Labour accepts the result of the referendum.’ That’s the opening line of the Brexit chapter in our dazzling manifesto that proved so popular at last year’s general election. Jeremy has said it, John McDonnell has said it and Sir Keir has said it. But as the debate moves on, the 2017 election seems a long time ago and what is now almost inevitable is Labour adopting another referendum as party policy at party conference.

The pressure on the party’s leadership is almost irresistible. The membership overwhelmingly support it; a vocal group of Labour MPs want it and the largest affiliated trade unions – as well as the TUC – think it’s the right thing to do.

Although a second referendum is seen by some as a way of putting ‘real’ opposition to Brexit into the Labour Party, it’s nothing more than a short-term conference-saving showpiece. The move would end up being a longer-term electoral headache for our party, which is still judged in some communities through the prism of Brexit.

To the communities that I represent, who voted overwhelmingly to leave the European Union, consider for a moment what message we’d be sending by asking for a second referendum. If the responses I’ve had on the doorstep this summer are anything to go by, it would not be received as a welcome policy shift by Leave supporters, Labour voters or indeed those who we need to vote Labour to regain seats like Stoke-on-Trent South.

There are practical problems too – what would a second referendum or ‘people’s vote’ ask? We leave the EU on 29th March 2019. If we have a vote on the final deal and reject it, are we paving the way for a hard ‘no deal’ Brexit? That’s certainly not something I or the Labour Party want. Or do we have a vote on whether to accept the deal or remain in the EU? Would Labour then campaign to stay in the EU? It’s unclear how we can square a promise to accept the referendum result with a campaign to stay in the EU and ignore the 2016 referendum result.

Our credibility in traditional Leave-voting heartland communities would be at rock-bottom, leaving a political vacuum that could pave the way for the resurgence of the populist right-wing in the form of a new or emboldened UKIP – or something worse. And we’d be asking voters to trust us that while remaining in the EU, we, the Labour Party, would be able to improve their lot in life. To trust us that we care about their views and worries, when we’ve just reneged on the biggest electoral event in over a generation.

As a party, our biggest failing is that we’ve spent too much time arguing over the parliamentary procedure of Brexit rather than trying to identify and tackle those social and domestic issues that caused people to vote Leave in the first place. Rather than taking voters on a journey that would have earned us the right to be heard on Brexit, we’ve spent two years arguing over ‘meaningful votes’ in parliament, debating the integrity of ‘Henry VIII’ power grabs by ministers and discussing mechanisms for sifting statutory instruments. We’ve generally allowed the Brexit debate to be framed by the government in terms of process and systems, not people and their real lives.

We should have spent the last 24 months offering radical solutions to show we recognise the concerns that drove the Brexit vote in the first place. Crucially, such an approach would have demonstrated that we take those concerns seriously.

Whether it’s the fact that we need a proper industrial strategy that invests in high-skilled manufacturing, while recognising that up-skilling and professional development are vital parts of retaining jobs and career progression. Or acknowledging that well-funded and accessible further education is just as important (if not more so) than free higher education. We also have to show that we, too, want a fair and firm immigration system, that law, order and defence are issues we take seriously and that we care as much about bus routes as we do nationalised railways.

In short, we have to show that we heard the country and understood why ‘taking back control’ encouraged committed non-voters to visit a polling station for the first time. A second referendum does not achieve that.

The harsh reality is that nothing has changed in the lives of my voters in the last two years that would make them believe that they would be any better off inside the EU now than they were two years ago. A second referendum would simply underscore the narrative that Westminster elites don’t care about the voices of real people. That we politicians aren’t interested in the views of everyday folk and their lives. That we are more interested in the process than the people.

And a people’s vote, for the Labour Party, would be the pinnacle of that electoral disconnect. We may satiate the siren voices of the middle classes and metropolitan big cities but by turning our backs on the traditional Brexit voting headlands, we doom ourselves to another Tory government and reinforce the view that ‘we know best and you should know your place’.