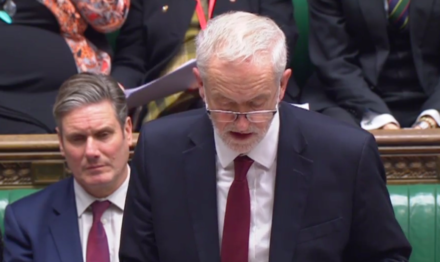 The Prime Minister says if we reject this deal, it will take us back to square one. The truth is Mr Speaker, under this government we have never got off square one. This botched deal is still a bad deal for the country and all yesterday did was mark the end of this governments failed and miserable negotiations.

Mr Speaker, there can be no doubt this deal would leave us with the worst of all worlds. No say over future rules and no certainty for the future. Even the Prime Minister’s own cabinet can’t bring themselves to sell this deal. The foreign secretary said yesterday and I quote “this deal mitigates most of the negative impact”. Hardly a glowing endorsement.

The silence from much of the rest of the Cabinet is telling. They know these negotiations have failed and they know it will leave Britain worse off. In fact, the National Institute of Economic and Social Research confirmed this today saying the Prime Minister’s deal would mean our economy 3.9% smaller than it would otherwise be.

This is more than our net contribution to the EU – which is currently £8.9bn a year or around £170m per week. So why is the Prime Minister claiming that extra money to the NHS will be due to a Brexit dividend? Of course, Mr Speaker, we look forward to the official Treasury forecasts and indeed the legal advice that this House voted to see nearly two weeks ago.

The Prime Minister’s claim – this deal takes back control of our borders, money and laws – is a fallacy. The reality is the opposite. The Prime Minister says the political declaration should give us comfort that the Northern Ireland backstop won’t be needed. But, in June 2020, this country will be faced with a stark choice. We can agree to extend the transition period or accept the backstop. So can the Prime Minister confirm that under her deal – if we are to avoid the backstop – we will have to accept whatever the EU demands to extend the transition period, leaving a choice of paying more money, without a say on the rules or enter a backstop leading to a regulatory border down the Irish Sea? So much for taking back control of our borders, money and laws.

Mr Speaker, it may not end there. The President of France has already made clear what his priorities will be in negotiating Britain future deal. On Sunday he said: “We will concentrate our efforts in order to obtain access to the British waters before the end of the transition period. And of course all of our fishermen will be protected.”

Isn’t it the case that under the Prime Minister’s botched deal we will have to agree to those demands on access to waters and quota shares if we want to finalise a future trade deal or extend the transition, breaking every promise the Prime Minister, the Environment Secretary and the Scotland Secretary have made to our fishing industry and coastal communities?

And we saw another climb-down over Gibraltar at the weekend. The Spanish foreign minister described the government’s concession as the most significant development since 1713. Isn’t it the case that by conceding that Gibraltar would not be covered by a future trade deal, Spain now has a veto over Gibraltar benefiting from any future relationship that is yet to be negotiated?

This was not something the Prime Minister presented to the Commons last week… Was it only raised by Spain at the weekend? Mr Speaker, in two weeks’ time, this House will vote on the legally binding Withdrawal Agreement, and the vague wish-list contained in the Political Declaration.

The Prime Minister would be negotiating that future agreement from a position of profound weakness, threatened with paying more to extend the transition, with no say over our money, laws or borders. And at risk of the utterly unacceptable backstop – which was only made necessary by her own red lines, most of which have since been abandoned.

It is not in the national interest for the Prime Minister to plough on, when it is clear this deal does not have the support of either this House or the country at large. Mr Speaker, ploughing on is not stoic. It is an act of national self-harm. Instead of threatening this House with a no deal scenario, or no Brexit scenario, the Prime Minister now needs to prepare a Plan B – something her predecessor failed to do.

There is a sensible deal that could win the support of this House based on a comprehensive customs union and strong single market deal that protects rights at work and environmental safeguards. The Prime Minister may have achieved agreement across 27 Heads of State, but she has lost support of the country.

Many young people – and others – see opportunities being taken away from them. Many people who voted Remain voted for an outward-looking and inclusive society, and they fear this deal and the rhetoric of the Prime Minister.

Likewise many people from areas that voted Leave feel this deal has betrayed the Brexit they voted for. It does not take back control. It will not make them better off. And it will not solve the economic deprivation that affects too many communities in Britain.

This deal it is not a plan for Britain’s future. So, for the good of the nation, this House has little choice but to reject this terrible deal.